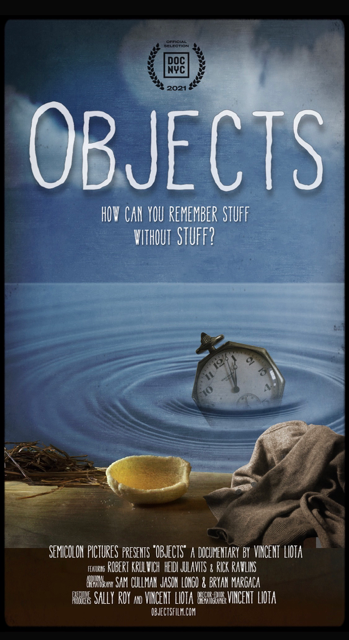 Greetings again from the darkness. Do you collect stuff?  Does your stuff have meaning to you? Are you obsessed about saving your stuff? Documentarian Vincent Liota looks at the psychological aspects of how we treasure our treasures. In the montage opening, President Jimmy Carter and the Pope tell us not to put value on material items, while others tell us our saved objects represent memories that take us to our happy place. Liota even includes the “Rosebud” clip from CITIZEN KANE.

Over the course of an hour, our attention is mostly on three individuals: NPR personality Robert Krulwich, designer Rick Rawlins, and author Heidi Julavits. They each have items to which they are emotionally attached. Robert is holding on to some decades old dried grass, Rick has a ‘sugar egg’ from a childhood birthday party, and Heidi has a sweater once owned by the late French actress Isabella Corey. Three very different people latching on to items with very little (or zero) intrinsic value, yet generating an emotional response that is clearly very real to them.

The film touches on those who stand opposed – those who save no objects simply out of emotional attachment. Included is a brief sequence featuring “Tidy Up with Kon Mari” for those whose lives get crowded or overrun by stuff. But those folks aren’t the focus here. Mr. Liota’s project could easily slide into the syllabus for a university level psychology class. It is personality types that we are studying. Why do rational, intelligent people find meaning and memories in what could/should be throwaway items? In fact, these objects seem to grow in importance over the years, with each having their own personal story associated.

There is an odd 3D Printer experiment included that doesn’t seem to work as a test on whether a replica worthless object can replace an actual worthless object, and still maintain the emotional appeal. In addition to Kane’s ‘Rosebud’, the floating bag from AMERICAN BEAUTY has its moment here, seemingly symbolizing the connection between an item and an emotion or memory. We are left with the impression that regardless of where we might fall on the “objects” scale, no effort should be expended in judging others. A pleasant memory might be just what someone needs at any moment. Who could possibly object to that object?

This entry was posted on Wednesday, November 17th, 2021 at 6:02 pm and is filed under Documentary. You can follow any responses to this entry through the RSS 2.0 feed. You can leave a response, or trackback from your own site.