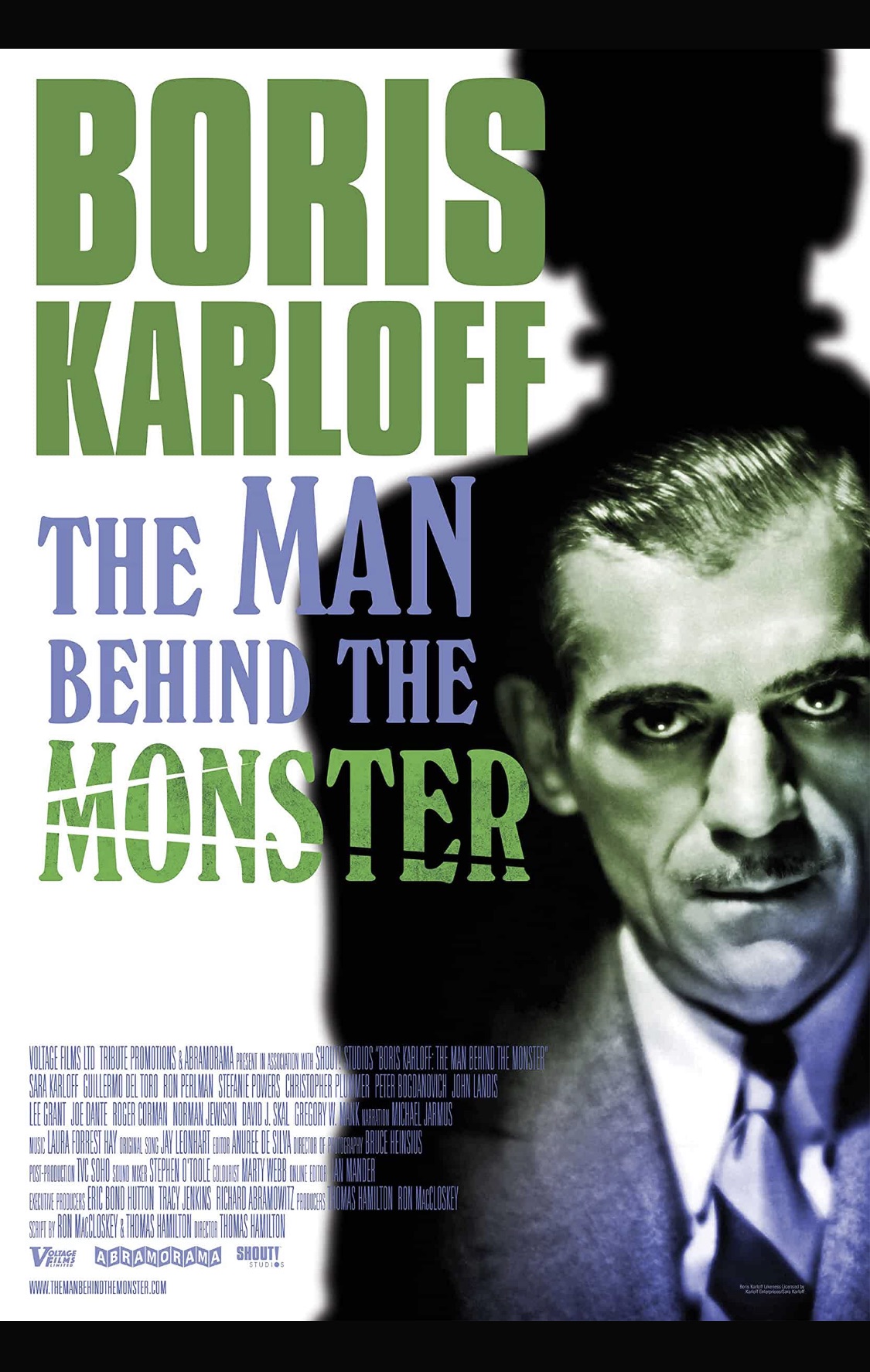 Greetings again from the darkness. It’s a rare occurrence, but every once in a while subduing my internal fanboy is a bit of a challenge. A documentary on the career of the great Boris Karloff certainly is one of those times. Mesmerized by the Universal monster films as a kid, Karloff’s appearances continued to have a hypnotic effect on me throughout his career … a career that spanned fifty years and ended only with his death in 1969. Of course Christmas time each year returns Karloff back into our homes through his Grammy-winning voice acting in “Dr Seuss’ How the Grinch Stole Christmas!”

Somewhat oddly, director Thomas Hamilton chooses to open the film discussing Karloff’s work in Mario Bava’s 1963 film BLACK SABBATH. Contemporary horror master Guillermo del Toro (THE SHAPE OF WATER, PAN’S LABYRINTH) comments that the film heavily influenced his own CRONOS (1993). It may be an unusual opening segment to kick off a discussion of Karloff’s career, but understanding his stature and influence is really the legacy – it goes much deeper than his iconic Frankenstein monster. The opening credits are played over a stream of stunning chalk/graphite drawings of Karloff’s many characters.

Some of the key interviews are conducted with film historians; film directors del Toro, Roger Corman, Joe Dante, and John Landis; actors Caroline Munro, Christopher Plummer, and Dick Miller; and Karloff’s own daughter, Sara, who is now at an age her father never saw. For the most part, we go chronologically through Karloff’s career with commentary on each of the key roles and films. The vintage footage brings back many memories and is a blast to watch – likely aided significantly by movie memorabilia collector and Karloff expert Ron MacCloskey (the film’s co-writer). Karloff’s physical presence on screen is noted on multiple occasions, as is his ability to emote, even through heavy makeup.

Obviously it’s FRANKENSTEIN (1931) that elevated Karloff from a character actor to a star. Although surprisingly, the man himself credits Howard Hawks’ THE CRIMINAL CODE (1930) as his big break. The following year, after the success of DRACULA with Bela Lugosi, Universal put Mary Shelley’s “Frankenstein” on the fast track and assigned James Whale to direct. Going against conventional wisdom, Whale decided not to cast Lugosi, and instead went with Karloff … in hindsight, a decision that looks brilliant. We hear about the makeup genius Jack Pierce, who worked with Karloff’s facial features in creating the now iconic look of the monster. Pierce had made an early name for himself with his work on THE HUNCHBACK OF NOTRE DAME (1923) and THE PHANTOM OF THE OPERA (1925), and then spent nearly two decades creating the now familiar Universal monsters: Dracula, Frankenstein, The Mummy, The Wolfman, and of course, Elsa Lanchester’s Bride in BRIDE OF FRANKENSTEIN (1935).

The film spends very little time on Karloff’s personal life, though it mentions his six marriages, his participation in the formation of the Screen Actors Guild (SAG), and his at-times debilitating back pain. He often wore a metal leg brace for stability and balance, and for those who only know him as the monster and the Grinch, the segments on his later career will likely be enlightening. Karloff loved live theater and received acclaim for his stage work in “Arsenic and Old Lace”. Daughter Sara confirms that he embraced television from the early days, and director Hamilton includes a clip of an elderly Karloff acting in a comedy skit with two other greats, Red Skelton and Vincent Price. As a fan, I truly appreciate some of Karloff’s work in his final 10-12 years, including “Shock” theater, the “Thriller” series, and Roger Corman’s THE RAVEN (1963). Beyond all of Karloff’s exceptional work through multiple mediums (including children’s book series), and that instantly recognizable face and voice, it’s his monster’s initial entrance onto the screen that remains one of the truly iconic moments in film history – even 90 years later.

The film is scheduled for a rolling release beginning September 17, 2021 and carrying through October 31. See the link for the schedule:

This entry was posted on Thursday, September 16th, 2021 at 5:05 pm and is filed under Documentary. You can follow any responses to this entry through the RSS 2.0 feed. You can leave a response, or trackback from your own site.