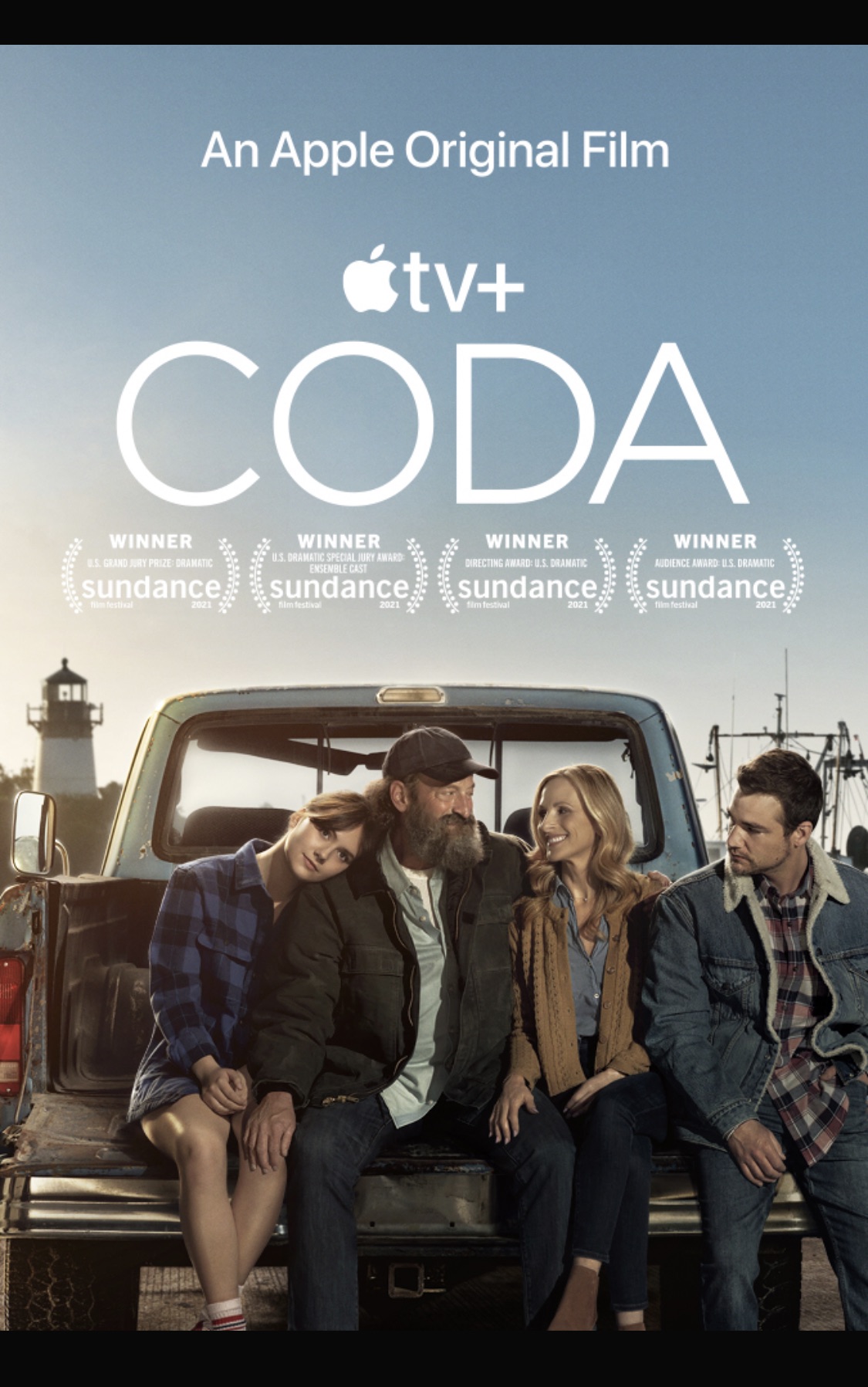 Greetings again from the darkness. Ruby Rossi is a high school student. She is also a CODA – Child of Deaf Adults. Her older brother is deaf too, meaning Ruby’s life has been spent as an interpreter for her family, while also working on the family fishing boat in Gloucester, Massachusetts, where they are treated as outcasts and viewed as oddities by others. Ruby also loves to sing and listen to music, activities she can’t share with her family. This is no coming-of-age tale, as Ruby has long been wise beyond her years. It is, however, a story of a young person finding their true self and breaking from the ties that bind to the only life she’s known.

Emilia Jones (HIGH-RISE, 2015) stars as Ruby, and we first see her slinging fish on the boat with her father Frank (Troy Kutsor) and brother Leo (newcomer Daniel Durant). Ruby belts out songs while the two men handle their duties, unaware of the lovely melodies filling the air. At home, the dinner table conversation is handled through ASL (American Sign Language) with mom/wife Jackie (Oscar winner Marlee Matlin, CHILDREN OF A LESSER GOD, 1986) leading the way.

At school, Ruby is an outcast due to her clothes, the lingering aroma of fish, and her “weird” family. With a silent crush on Miles (Ferdio Walsh-Peelo from the excellent SING STREET, 2016), Ruby signs up for choir, but freezes during the audition. The choir director, Bernardo (roll the r’s) Villalobos, is played energetically and colorfully by Eugenio Derbez (OVERBOARD, 2018), and he offers encouragement to Ruby – mostly because she has a beautiful singing voice. Bernardo explains how her singing voice offers a path to college, something she’s never before considered due to family responsibilities.

There is a lot going on in this film from writer-director Sian Heder (TALLULAH, 2016). It’s obviously adapted from the 2014 French film LA FAMILLE BELIER, and plays as a mainstream crowd-pleaser, when it just as easily could have been a deep cut indie film. Ms. Heder’s approach means a larger viewing audience, though there are elements we wish had been further explored. The teen romance never really clicks, and there are hints that Bernardo’s story holds more levels than we get. However, the Rossi family dynamics are quite something to behold. Father Frank wears his emotions on his sleeve. Sometimes those emotions are angry and bitter, while other times quite comical or even horny (for his wife). Brother Leo wants desperately to lead the family business towards prosperity. He has ideas for growth, but is frustrated being dependent on Ruby as a conduit to the community.

Mother Jackie and Ruby have a typical mother-teenage daughter relationship. The mother wants status quo where the daughter remains an integral part of the family, while the daughter wants her mom to acknowledge the dreams for a different life – one that capitalizes on her talents. When Jackie questions her daughter on her singing, she does so in the most hurtful way possible (brilliant writing). And yet, when mom recounts Ruby’s birth, the love is as clear as the disconnect … and likely to draw a tear or two. Filmmaker Hader serves up numerous strong scenes, but two really stood out for this viewer. First, when Ruby is singing on stage, we “hear” what the parents hear, and their pride is obvious. The second occurs when dad asks Ruby to sing for him as they are perched on the backend of the car. It’s phenomenal acting by Kutsor, and further clarifies a lifelong father-daughter bond … and the first time he fully comprehends her talent. All four leads give strong performances, and it’s a star-making performance from Ms. Jones (think a young Saoirse Ronan).

Apple paid a record-breaking $25 million for the film’s rights at Sundance, and the mainstream appeal of this family drama sprinkled with comedy and life messages is indisputable. So while my preference would have been more focus on the ‘outsider’ aspect of the Rossi family in the community, it’s easy to see why this choice was made. It’s an entertaining film that will likely land on many year-end “Best” lists. Maybe even mine.

This entry was posted on Thursday, August 12th, 2021 at 5:56 pm and is filed under Comedy, Drama. You can follow any responses to this entry through the RSS 2.0 feed. You can leave a response, or trackback from your own site.