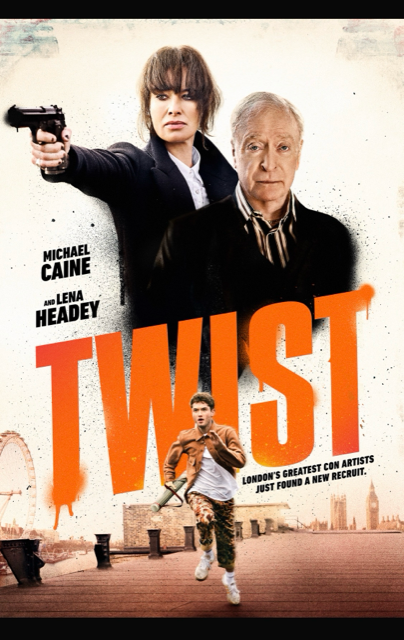 Greetings again from the darkness. This is billed as “a modern take on the classic tale of Oliver Twist”. The problem with that is this feels neither modern, nor in line with the renowned Charles Dickins novel. Mostly it feels like a failed attempt at copying Guy Ritchie’s SNATCH, or the KINGSMAN movies, or even the NOW YOU SEE ME movies. Directed by Martin Owen with a script by John Wrathall, Sally Collett and six other credited contributing writers (in addition to the inspiration from Dickens), this film simply lacks the entertainment value necessary for any type of positive recommendation. So I won’t be writing much here, only addressing what we see on screen.

Raff Law (Jude Law’s son) nabbed his first starring role as Twist, a street artist living on his own. One day he stumbles into Dodge (Rita Ora), Batesy (Franz Drameh), and Red (Sophie Simnett) who introduce him to Fagin (two-time Oscar winner Michael Caine), who presides over this group of criminal misfits. The offer of free clothes, decent housing, a team to work with, and a possible romance, is enough to entice Twist out of his rooftop tent.

This is really a simple art heist movie with multiple scenes of parkour included in place of real danger or creative thrills. David Walliams plays the target, and as a bonus, ripping him off would settle an old score for Fagin, and the over-the-top psychopath Sikes (Lena Headey). Somehow out of step in a movie with no real step is a recurring gag featuring a traffic cop played by Leigh Warden. It’s unclear if this was held over from an early slapstick version of the film, or if it was intended to portray Twist as an outlaw.

Noel Clark maintains his dignity as Detective Brownlow, and Ms. Headey attempts to liven things up, but mostly the characters are forgettable due to an all too simple story and a lack of development. The annoying music doesn’t help, and neither does the lack of any insightful social commentary (a Dickens specialty). It seems obvious the filmmakers were trying to create something edgy and modern, and go so far as to open with a jab at Carol Reed’s 1968 musical OLIVER!, by having narrator Twist state there will be ‘No singing. No dancing. And no happy ending.’ If a filmmaker risks re-making or re-imagining a classic story, they must be ready for the comparisons. This one falls well short of that 1968 version, as well as David Lean’s 1948 OLIVER TWIST, with Alec Guinness as Fagin.

This entry was posted on Thursday, July 29th, 2021 at 9:58 pm and is filed under Comedy, Thriller. You can follow any responses to this entry through the RSS 2.0 feed. You can leave a response, or trackback from your own site.