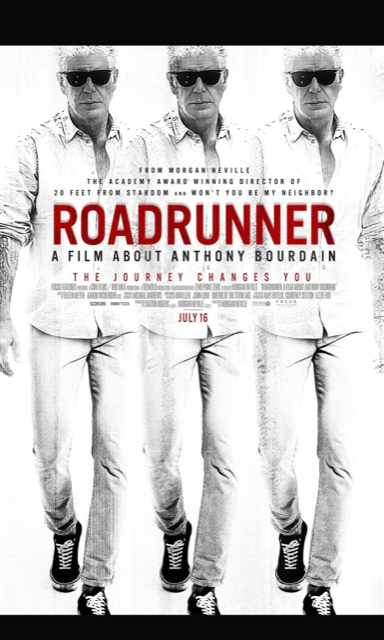 Greetings again from the darkness. As the film begins, we understand there will be no happy ending. Anthony Bourdain committed suicide by hanging in 2018 at the age of 61. As it was reported, everyone was shocked. Oscar winning documentarian Morgan Neville (TWENTY FEET FROM STARDOM, 2013) interviews those who knew him best, and by the end of the film, we are left wondering why these folks were shocked at how his demise.

Bourdain … called Tony by those who knew him … spent most of the last 20 years of his life with a camera focused on him, so director Neville allows Bourdain to tell much of his own story. “I got very lucky” is how he explains turning a dishwasher job into the position of Chef at Brasserie Les Halles on Park Avenue in New York, and then evolving into an author, talk show guest, and host of TV travel and culinary shows.

Perhaps you read Bourdain’s first book “Kitchen Confidential: Adventures in the Culinary Underbelly”, or maybe you know him from one of his four TV shows where he traveled around the globe eating strange food and exploring unusual cultures. Then again, to some, he’ll always be known as the guy who was filmed eating a live cobra heart. All of those bits are discussed here, but the real interesting segments occur as others talk about the man they knew/loved/worked with.

Bourdain’s second wife Ottavio, his brother, his friends, his agent, and his production crew are all interviewed here and are surprisingly forthcoming in their recollections and insight into Tony. We even see clips of Bourdain with his daughter, though she is not interviewed. The descriptions add up to a complicated guy. A natural storyteller who was a control freak and hard on those he worked with. Yet he was also charming, immensely intelligent and articulate, and eager to make satisfying TV. He also comes across a bit lost as a person most of the time, never more than when he’s filmed asking Iggy Pop, “What thrills you?” There is even a segment with Tony in a session with his therapist.

The film, and Bourdain himself, don’t shy away from his addictive nature. He admits to a drug problem when he was younger, and for the rest of his life he jumped from one non-drug related addiction to another. His personal life seemed to take a turn when he fell for Italian actress Asia Argento and he became an advocate for the #MeToo movement. His tragic end is discussed, and maybe those closest to him were simply too close to see what seems obvious to us now. Director Neville uses no shortage of archival footage and photos, but it’s the personal interviews that strike the emotional chord here. Two films, APOCALYPSE NOW and VIOLENT CITY apparently had a dramatic impact on Bourdain, and though the end is tragic, his legacy as an adventurous storyteller lives on.

This entry was posted on Thursday, July 15th, 2021 at 6:30 pm and is filed under Documentary. You can follow any responses to this entry through the RSS 2.0 feed. You can leave a response, or trackback from your own site.