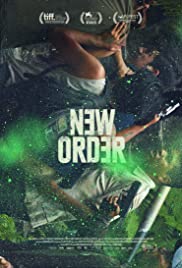 Greetings again from the darkness. “You say you want a revolution … well, you know … we all want to change the world.” Writer-director Michel Franco hits head-on the always hot, and very current topic of the haves versus the have-nots, and I immediately thought of those Beatles’ lyrics.

Chaos at a hospital and a pile of bodies informs us trouble is brewing on the streets of Mexico. We then cut to a lavish wedding event being held at the luxurious residential compound of the Novellos, a wealthy family whose daughter Marianne (Naian Gonzalez Norvind) is marrying her fiancé Alan (Dario Azbek). Her father Ivan (Roberto Medina) is an important businessman who invited other important people and dignitaries. As the attendees mingle, her mother Rebecca (Lisa Owen) is summoned to the gate to meet with Ronaldo (Eligio Melendez), a former employee who is asking for the money to pay for a surgery his ill wife needs. What follows is the mannered way in which the Novellos react. They give Ronaldo some money, but it’s far short of the amount needed. It’s Marianne who, even on her wedding day, tries desperately to help him.

Marianne has Cristian (Fernando Cuautle), the son of loyal housekeeper Marta (Monica Del Carman), drive her to where Ronaldo lives. Unbeknownst to Marianne, an insurgence has disrupted the wedding festivities and carnage has ensued at her house. Upon arrival at Ronaldo’s house, masked soldiers take Marianne hostage. Her vibrant red outfit and the green paint used by protesters provide symmetry to the national flag of Mexico as the streets are under siege. Many of the elite rich have been killed, while others taken hostage for ransom and torture. Filmmaker Franco expertly captures the frenzy and terror brought on by the revolution.

As the uprising takes hold and the coup progresses, we quickly see the effects of power and greed. Most of the story is told from the viewpoint of the privileged, and that’s likely to offend many. At times we are confused about just how many sides there are in this war, though it seems Franco’s point is that there are no good guys. The film teeters on the line between social commentary and exploitation, due to the violence and greed – we even see the glee on a maid’s face as she loots the valuables from her employer. We find little empathy for anyone here, except of course, for those being held captive and tortured. Certain elements thrive in chaos, and the situation turns to Authoritarianism. The cynical message is that entitlement and corruption exist regardless who is in charge. In other words, the more things change, the more they stay the same. The “New Order” is the same as the old – just with new faces. Franco has highlighted unrest specific to Mexico, but also nods to global issues.

This entry was posted on Thursday, May 20th, 2021 at 6:31 pm and is filed under Drama, Thriller, World Cinema/Foreign. You can follow any responses to this entry through the RSS 2.0 feed. You can leave a response, or trackback from your own site.