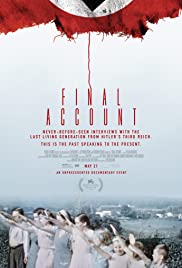 Greetings again from the darkness. Relatively late in life, director Luke Holland discovered his Jewish roots and the history of his grandparents being murdered in concentration camps during the Holocaust. Mr. Holland passed away in 2020, but not before he finished the documentary he started in 2008: interviewing surviving Germans from Hitler’s Third Reich era. This seems like a miserable project to undertake, and an uncomfortable film to watch, but what we see on screen is a case study in human psychology and insight into how these folks live with their memories and past actions.

Holland interviewed “regular” German citizens, not just those who became soldiers and officers. To set the stage, the film opens with the quote from Primo Levi:

“Monsters exist, but they are too few in number to be truly dangerous.

More dangerous are the common men, the functionaries ready to believe

and to act without asking questions.”        Primo Levi

The point being, why did so many Germans go along with the atrocities, either by participating or looking the other way? Why did more not speak up or take action? The obvious and presumptive answer is that they feared for their own lives. But what we hear directly from these people doesn’t always fit the obvious.

Holland is running the camera and asking the questions, and he has each interviewee go back to the beginning – how they got started. We hear stories and see clips of young German kids happily playing. We learn they are then transitioned to Hitler Youth at age 14 – this was parodied in Taika Waititi’s brilliant JOJO RABBIT (2019). These kids were in uniforms all hours of every day. So the mandatory brainwashing started at an early age, and then some were transitioned to the Waffen SS, which one of the members boasts was the elite corps and “had the best tanks”. This is the snapshot of the Nazi machine – start them early and then train them to kill for the cause.

Some of those interviewed were soldiers, some worked at concentration camps, others held regular jobs, while some had no history of service. What they have in common is that they all lived in Germany during a time when the world veered towards a moral abyss. To Holland’s credit, he lets the answers stand on their own – there is no agenda or propaganda behind the film. He leaves it to viewers to process what is said, and whether anyone wants to find symmetry with today’s world.

“I don’t know. I didn’t participate.” Of course, denial and memory block has been a coping device for many of these folks. Some express the burden of guilt, while others rationalize inaction due to fear. Only one states matter-of-factly, “I have no regrets.” There is even mention that Hitler had “the right idea”, but a different strategy would have been the better approach. Holland instigates discussion about being complicit and perpetuating an evil … this makes for spirited conversation. Holland was not a Psychologist, but his film is a remarkable character study, and in the words of one of those interviewed, “Today, you wonder how that could happen.”

This entry was posted on Thursday, May 20th, 2021 at 6:44 pm and is filed under Documentary. You can follow any responses to this entry through the RSS 2.0 feed. You can leave a response, or trackback from your own site.