SECRETS OF THE WHALES (2021, docuseries) 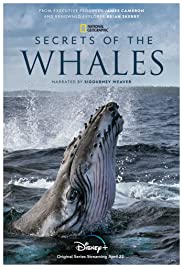 Greetings again from the darkness. For many of us, our exposure to whales is limited to learning in school they are the largest mammals on Earth, and browsing travel guides displaying fantastic photographs of breeching whales alongside various tour excursions. National Geographic is on a mission to take us deeper into the world of these marvelous marine creatures. This 4-part docuseries is Executive Produced by Oscar-winning director James Cameron and award-winning photographer Brian Skerry, and was filmed over 3 years in multiple locations around the globe.

Episode One is titled “Orca Dynasty”, and it explores communication and social structure that occurs within the family pod and community … a recurring theme in each of the episodes, and across the five types of whales covered. Orcas, sometimes referred to as “killer whales”, are the gorgeous black and white whales often featured at water parks … although thankfully not as frequently as in the past. This segment takes us to New Zealand where we see the Orcas work together in hunting stingray, and utilize sophisticated sonar as their guide. We also follow them to the frigid water of the Arctic Ocean, as well as their confrontations with elephant seals in The Falklands.

Episode Two, “Humpback Song”, features a baby learning to “speak”, and again focuses on the culture and communication of the humpbacks. We witness these whales using their large brains for “bubblenet” fishing in Alaska – a highly coordinated effort that has been occurring for 40-plus years. The humpbacks breech and then slap their fin to communicate with each other. Their ‘song of the sea’ is featured in the Cook Islands, and we see the bonding that occurs between mother and calf. It’s awe-inspiring to note that 100,000 whales from around the world simultaneously head to Antarctica for a krill buffet that results in each whale gaining up to 12 pounds an hour!

In Episode Three, “Beluga Kingdom”, we follow along as these creamy white whales and their exceptionally social manner, adopt a stray narwhal whale into their pod so that it doesn’t die alone. The narwhals are the most unusual looking whale in existence, even in comparison to the Belugas. With skin 100 times thicker than humans, Belugas are also known for group births, and generations of Belugas have spent one-third of their summers in Hudson Bay (Canada).

The fourth and final episode, “Ocean Giants” focuses on the massive sperm whales, best known as “Moby Dick”. We learn their brains are six times larger than humans, and they use a Morse Code style clicking sound to communicate with each other. In Dominica (eastern Caribbean) we find 20 sperm whale families who deep dive to feed on 100 squid per day. This segment also includes the often tragic ramifications of human debris in the ocean, as sea turtles are entangled in discarded fishing nets.

Photography throughout the series is stunning and breath-taking. It takes us to places we never knew existed or might have previously only dreamt of. The only downside is the narration from Sigourney Weaver, whose lack of energy in reading, periodically gives this the sound of an old-school educational film. James Cameron provides an epilogue for each episode, but without a doubt, it’s the fabulous creatures themselves that hold our attention. We find the Orcas, Humpbacks, Belugas, Narwhals, and Sperm Whales to be awe-inspiring and mesmerizing, and it’s fascinating to learn how intricate and complex their social structures and cultures are. These intelligent giants of the sea draw us right into their world; and we are better off for it.

This entry was posted on Wednesday, April 21st, 2021 at 9:18 am and is filed under Documentary. You can follow any responses to this entry through the RSS 2.0 feed. You can leave a response, or trackback from your own site.