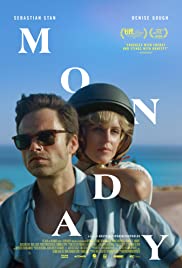 Greetings again from the darkness. I will admit upfront that I’m no fan of watching late thirty-somethings living their lives like a never-ending fraternity party. So when the film opens on a disco ball, and we see a woman breaking up with her boyfriend on the phone while the thumping dance blasts, and then she immediately hooks up with the equally-aged DJ … well, I was concerned that writer-director Argyris Papadimitropoulos and co-writer Rob Hayes decided to make this film as a kick to the shins of any job-holding, respectable grown-up movie watcher. Fortunately, it’s not as bad as all that.

The two instant-lovers wake up naked on the beach the next morning and introduce themselves while handcuffed in the back of a police car. Denise Gough (JULIET, NAKED) is Chloe, an immigration lawyer who has been in an abusive relationship, and seemed to move on quickly (minutes later), without much thought. Sebastian Stan (Bucky from “The Avengers” franchise) is Mickey, a party boy DJ who is also an advertising jingle writer. Chloe and Mickey are both American ex-pats living in Athens, Greece. He’s been knocking around for almost 7 years, and after 18 months, she’s now scheduled to head back to the U.S.  And yes, we do get the obligatory frantic airport moment – this one is less touching and more contrived.

The next few weekends basically involve these two going at it like rabbits at any time and in any place. Chloe and Mickey are a beautiful couple in a gorgeous setting, and it’s quite obvious they are incompatible as a couple doing anything other than coupling. If thirty-somethings bonding over partying seems like a recipe for disaster, the party they throw will prove your point. It’s an understatement to say her circle of sophisticated friends don’t mingle well with his group of belligerent scofflaws. Supporting work is provided by Dominique Tipper as Bastian, a former bandmate with Mickey, and Yorgos Pirpassopoulos as Argyris, Mickey’s close friend who wields power locally due to family money.

This is really the Sebastian Stan and Denise Gough show. He’s a good fit as the charming, self-defeating guy who can’t grow up, while she’s an enigma – a woman seemingly too smart to fall for this guy and screw up her life after a weekend fling. Ms. Gough is strong in her ability to create a complex character from a fragmented script that forces her to overcome weak dialogue and absurd situations. As an example, Chloe and Mickey have 3 police encounters … which is 3 more than the average person experiences in a lifetime.

Athens and the island of Antiparos make for a stunning setting for a movie, but the script falls short of the work necessary for this couple to transition from a wild weekend fling to an actual relationship with responsibilities, jobs, and a kid. We see how Chloe feels trapped, but the third act spins out of control as lot of Fridays turn into the titular Monday of reckoning.

This entry was posted on Thursday, April 15th, 2021 at 5:24 pm and is filed under Drama, Rom-Com. You can follow any responses to this entry through the RSS 2.0 feed. You can leave a response, or trackback from your own site.