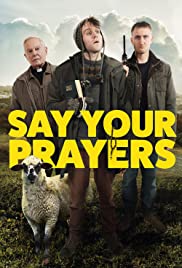 Greetings again from the darkness. The brothers have chosen to accept the mission they’ve been given, which is to assassinate outspoken atheist writer, Professor John Huxley. The deed is to be done during the Ilkley Literature Festival where Huxley is a featured speaker. Brothers Victor and Tim are Christian radicals, and not particularly clever. In fact, the terrific opening sequence shows us an execution on a hill – one that displays the tragic effects of mistaken identity.

Writer-director Harry Michell (he played Nick in YESTERDAY, 2019) and co-writer Jamie Fraser (his first feature film) deliver a strong first act that really gets our hopes up. Tom Brooke (PIRATE RADIO, 2009) plays Victor, the high-strung older brother to Tim, who is played by ski cap-wearing Harry Melling (the “Harry Potter” franchise). Victor is prone to violent outbursts, while Tim is the more sensitive type – and a bit slow at times. That contrast between the brothers is a fun element, as is the close bond they share.

Director Michell utilizes a recurring men’s choir (breaking the fourth wall) as a way to both drive the story and add a bit of humor. In the first half-hour, the two most obvious comparisons we make are THE BOONDOCK SAINTS (1999) and IN BRUGES (2008). Unfortunately, that’s a standard that the film simply can’t sustain. It seems to be filled with any number of promising ideas that mostly just fizzle or fade out. A perfect example is the dynamic between the two investigative cops played by Anna Maxwell Martin and Flora Spencer-Longhurst. The banter between these two characters is just never quite as colorful or pointed as we wish.

The supporting cast includes Vinette Robinson as Imelda, one of the festivals organizers who has a close relationship with Professor Huxley. Imelda’s time with Tim works well at times. Roger Allum effectively portrays the arrogant atheist author, and Derek Jacobi plays Father Enoch, the priest who raised the two orphans, Tim and Victor, and now has them doing the church’s dirty work. The real standout here is the film’s editing by Xanna Ward Dixon and Dylan Holmes Williams. The pacing and quick cuts keep us engaged and minimize the shortcomings of the story … which certainly could have worked with more risk-taking and pushing of the envelope. Not going far enough is film’s downfall – and it’s quite disappointing given the promising start.

This entry was posted on Thursday, April 1st, 2021 at 6:09 pm and is filed under Comedy, Drama. You can follow any responses to this entry through the RSS 2.0 feed. You can leave a response, or trackback from your own site.