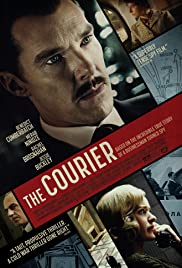 Greetings again from the darkness. Spies, and the whole world of espionage, are prime for cinema thanks to the globe-trotting and varied settings, the personality of those drawn to such a calling, and the intrigue and two sides of the work itself – either turning on those to whom one was once loyal, or even pretending to. Director Dominic Cooke (ON CHESIL BEACH, 2017) and writer Tom O’Connor (THE HITMAN’S BODYGUARD, 2017) enter the spy thriller genre with a strong cast and a Cold War setting … not the first to do so, and certainly not the last.

The film is based on a true story, so of course there are conflicting recollections of how this all went down. Oleg Penkovsky (played expertly by Merab Ninidze, McMAFIA, 2018) was part of GRU, the main intelligence agency of the Soviet Union. His front row seat to, and subsequent concern with, Soviet Premier Nikita Khrushchev’s apparent obsession with starting a nuclear war with the United States, led Penkovsky to reach out to the U.S with classified intelligence in hopes of thwarting global doom. This was the height of the Cold War, with the Cuban Missile Crisis ultimately a key element of Penkovsky’s intel.

Ambitious CIA Agent Emily Donovan (Rachel Brosnahan, “The Marvelous Mrs. Maisel”) reached out to MI6 Agent Dickie Franks (Angus Wright), who recruited British salesman Greville Wynne (Benedict Cumberbatch) to be their amateur spy … a regular citizen to conduct regular business while procuring valuable documents from Penkovsky. Greville is portrayed as anything but a James Bond-type. Instead, he’s a fun-loving family man whose wife Sheila (Jessie Buckley, I’M THINKING OF ENDING THINGS, 2020) has forgiven him once for marital indiscretion, and is not inclined to do so again.

This story occurred not long after Pyotr Semyonovich Popov was executed for delivering Soviet intelligence to the United States. Because of this, the CIA had a weak presence and required Britain’s assistance … enter Greville Wynne. Greville is an odd bird. One could even say a bit goofy. However, Cumberbatch delivers a terrific performance as he transitions into a more complex and courageous man than the one we initially meet.

Although the story is not as tightly told as the best spy thrillers, there are two segments that are pretty well done. Watching Penkovsky (code name “Ironbark”) and Greville get to know each other and then work together is quite interesting – and made even better by the two actors. Also the final act, with both men in KGB prison, finally ups the tension level to what we expect for the genre. The brutal environment and mistreatment is well conveyed, and it’s the point where we realize what the risk-taking of espionage can lead to. There are times the film is similar in tone to THE INFORMANT, and other times it recalls BRIDGE OF SPIES, though the latter is a superior film. This was a crucial point in the Cold War, and the film is interesting enough thanks to the cast and real life story.

THE COURIER is receiving a theatrical release on March 19, 2021

This entry was posted on Friday, March 19th, 2021 at 12:49 am and is filed under Drama, Thriller. You can follow any responses to this entry through the RSS 2.0 feed. You can leave a response, or trackback from your own site.