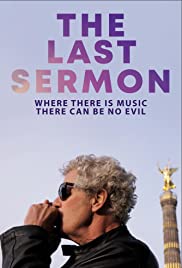 Greetings again from the darkness. In 2003, Jack Baxter and Joshua Faudem were in the process of making a documentary on Mike’s Place, a blues club in Tel Aviv located next door to the American Embassy. The purpose of the project was to show that there was more to Israel than violence and terrorism. On April 30, while they were filming, two British-born Hamas suicide bombers changed the course of the documentary and the lives of the filmmakers.

Joshua Faudem finished that documentary, BLUES BY THE BEACH, while his filmmaking partner Jack Baxter recovered from the severe injuries he incurred during the blast at the club. The two reunite in what seems to be Mr. Baxter’s personal mission to prove, in his own words that, “murder is not the essence of Islam”. He wants to understand or make sense of radicalism, and to meet with the families of the Tel Aviv bombers. While his experience makes this a logical pursuit, we know the likelihood of success is nil.

The film opens with a quote from Cervantes’ Don Quixote: “Where there’s music, there can be no evil.” Baxter, now using a cane for stability, takes this to heart and ties in music to most of the refugee camps he visits. It should also be noted that Baxter still has a piece of what he calls “organic shrapnel” embedded in his arm. Yes, it’s a bone fragment of one of the bombers. Baxter’s mission for the film takes him to many different areas of Europe, including Jerusalem, Serbia, Hungary, Berlin, Prague, Paris, and London. His meeting with the Mayor in Hungary is especially interesting, as we are informed that his country welcomes refugees, but the fence/wall he built is to show that Islamists are not welcome.

The film takes its title from the Prophet Muhammed’s Last Sermon, and it’s referenced a few times throughout as a contrast to Islamic extremists. The film succeeds as a personal journey for Baxter, but not so much as research on terrorism or discovering how so many have corrupted Islam into a call for violence. Most of the interviews and discussions with refugees, imams, and others are left at face value, so no groundbreaking occurs here, other than traveling to various areas and as a cleansing for Mr. Baxter.

Gravitas Ventures is releasing the film in virtual cinemas and VOD platforms December 15, 2020

This entry was posted on Tuesday, December 15th, 2020 at 11:15 pm and is filed under Documentary. You can follow any responses to this entry through the RSS 2.0 feed. You can leave a response, or trackback from your own site.