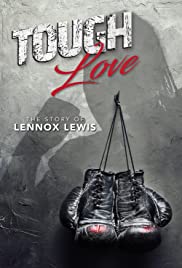 Greetings again from the darkness. After winning a fight, Mike Tyson spouted, “Lennox Lewis, I’m coming for you.” That fight didn’t occur for a few years, yet that match is central to the Lewis story in this biography from co-directors Seth Koch and Rick Lazes. When the Lewis vs Tyson fight finally did happen in 2002, it certainly wasn’t the peak form Tyson that had taken the boxing world by storm years earlier. The generational ties between Tyson and Lewis are stressed here, well, because outside of a tremendous boxing career, Lennox Lewis is not terribly interesting as the subject of a documentary, other than as an anomaly in the boxing world.

Dr. Dre narrates the story, and we must respect Lennox for overcoming a childhood where he was abandoned, at least for a few years. Boxing gave him the structure and purpose to avoid the life on the streets that would typically occur in this situation. Much is made of his tangled roots. Lewis’ parents were from Jamaica, though he was born in England, and raised in Canada. We trace his boxing background from juniors to the amateur ranks, including two Olympics (1984 and 1988), and finally on to his professional career. We are told that “The Heavyweight Champion of the World” is the most coveted title in sports, though minimal attention is given to boxing’s numerous scandals and less than stellar reputation. Being mostly a tribute to Lewis, we do see a man who reached the pinnacle of an industry of which he was mostly an outsider.

Quite reserved as an adult, and lacking the bluster commonplace in the sport, Lewis is the polar opposite of the constantly posturing and bellowing of Don King, the longtime face of boxing promotions. We see King via numerous archival footage clips, and it is interesting to note how since Lewis opted not to sign with King, the megaphone-mouthed promoter always seemed to work extra hard against him. It’s actually Lewis’ selection of Brit Frank Maloney that provides the most fascinating aspect of the story, but that’s a twist best left unspoiled.

Lewis’ boxing career is chronicled, including his Olympic Gold Medal, being ‘robbed’ in the first fight against Evander Holyfield, and losing and regaining his title within the same year. Unifying the titles/belts in 1999 was an impressive accomplishment, but also goes straight to the unorthodox structure of a sport, and that first Holyfield fight left us wondering just how deep corruption ran. But that’s not the movie Koch and Lazes have made. Instead it’s about how Lewis retired as champ in order to spend more time with his lovely wife Violet and his family … just one more thing that sets him apart from the stereotypical boxer.

The documentary begins on Amazon, Apple TV/iTunes, and numerous VOD platforms on December 8, 2020.

This entry was posted on Monday, December 7th, 2020 at 10:30 pm and is filed under Documentary. You can follow any responses to this entry through the RSS 2.0 feed. You can leave a response, or trackback from your own site.