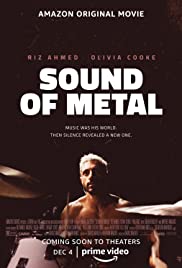 Greetings again from the darkness. Many of us have attended concerts and experienced a ringing in our ears for a while afterwards. Have you ever thought about the musicians who are playing that music night after night? It’s a risk requiring precautions … and even then, disaster can occur. The first narrative feature from writer-director Darius Marder uses the hearing loss of a heavy metal drummer to explore what happens when the life we know is suddenly snatched away.

Riz Ahmed (TV mini-series “The Night Of”) stars as Ruben, the aforementioned drummer. The film opens with Ruben drumming on stage as his lead singer/girlfriend Lou (underrated Olivia Cooke, THOROUGHBREDS, “Bates Motel”) screams out the lyrics punk-style for their band, Blackgammon. We witness Ruben’s euphoria in the moment, with his “Please Kill Me” tattoo visible across his chest. Afterwards, we see the couple in their RV living a happy life of veggie juice, yoga, and slow dancing between gigs. The first crack in the armor is Lou’s scratching her arm from anxiety, and the next is devastating for Ruben and the couple.

Ahmed is terrific in the most important moments, and he’s assisted by top notch sound design from Nicolas Becker (GRAVITY, 2013). This allows us to feel and experience the moment Ruben realizes he has a problem, and how he begins to process this. Director Marder utilizes subtitles/closed captioning throughout, both for the deaf community and to make Ruben’s situation visceral for viewers. When the doctor explains hearing loss, frustration and defiance kick in for Ruben. He becomes focused on the $40-80,000 cochlear implant option, and views it as a way to maintain his normal life.

Lou becomes worried for Ruben’s well-being, and we learn he’s a recovering heroin addict. He reluctantly agrees to a remote deaf community/rehab facility run by Joe (Paul Raci). It’s here that Ruben learns sign language and begins to adjust to his new reality. Joe is a very patient and sage advisor, and preaches that being deaf is not a handicap – it’s not viewed as something to fix. Implants are considered an affront to the deaf culture, and the film neither shies away from this conflict, nor magnifies it.

The clash between Joe’s patience and guidance, and Ruben’s desire to get his normal life back comprise much of the film. The final scene between the two is gut-wrenching thanks to extraordinary acting from Ahmed and especially Raci. Supporting work in the film is provided by Lauren Ridloff (a hearing-impaired actor) and Mathieu Amalric as Lou’s dad. The final act is quite something to watch. The director says the film is about the finality of life changes, and letting go of what we can’t fix. Joe urges Ruben to appreciate the stillness, and we also see a love story that served its purpose and run its course. Will the distortion lead Ruben to find peace in the stillness? Depending on your stance in regards to the debate within the deaf community, the ending either works for you or it doesn’t. Either way, it’s well done and well-acted.

Amazon Studios will release this in theaters November 20, 2020 and on Prime Video December 4, 2020

This entry was posted on Thursday, November 19th, 2020 at 11:19 pm and is filed under Drama. You can follow any responses to this entry through the RSS 2.0 feed. You can leave a response, or trackback from your own site.