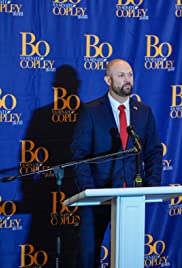 Greetings again from the darkness. During her campaign for the presidency, Hillary Clinton appeared at an Ohio Town Hall meeting, and while pushing green energy alternatives said, “We are going to put a lot of coal miners and coal companies out of business.” It’s the kind of statement that makes headlines, and it did. Of course, Hillary went on to say that it was important we don’t forget about the people that work and depend on the coal industry, but that never became part of the story. Director Todd Drezner does include it here, while mostly focusing on how West Virginian native Bo Copley, a former mining company employee, became a candidate for U.S. Senate.

As a refresher, we see Hillary’s Town Hall statements, and we also see the clip of the roundtable where Bo Copley handed a family photograph to Hillary, confronting her with the real life impact of shutting down coal production.  That simple gesture turned Bo Copley into a “coal miner celebrity”, ultimately pushing him towards the campaign that inspired this documentary. The film opens in June 2017 in Williamson, West Virginia, as Bo rehearses his announcement speech. He’s neither polished, nor confident, and admits, this is “not my natural habitat”.

One thing that quickly becomes clear – Bo is a good dude. He’s a family man and a man of faith. Another thing that’s just as clear – Bo is in over his head for this process. He’s a well-intentioned nice buy, but his platform seems to be, “I think an everyday person should represent everyday people.” This happens to be a highly contested Republican primary featuring five other candidates, two of which are skilled politicians, and a third is a mining company owner who served prison time for a tragedy that killed 29 miners.

The film is structured as a countdown to the primary, and it follows Bo on some of his campaign stops – most of which reinforce that he’s not equipped for this race. He is the prime example of a guy who wants a change in politics and is willing to step up, but simply doesn’t have the understanding … or the funds … to actually compete. He believes if people like him, they’ll vote for him; so there’s no need to ask for votes, even as he’s coaching a kids’ soccer team.

Bo’s wife Lauren is also included here, and she’s supportive of his run, though not initially. Their Christian beliefs are on full display. Director Drezner’s and Bo’s best moment occurs during a talk show interview when the candidate answers the obvious question, “Why start your political career running for the U.S. Senate.” Bo’s answer is spot on and thought-provoking, and goes to the heart of the flaw in our system. The film should be watched by anyone looking to dive into a political run, as it excels as a how-not-to guide.

This entry was posted on Monday, October 19th, 2020 at 6:09 pm and is filed under Documentary. You can follow any responses to this entry through the RSS 2.0 feed. You can leave a response, or trackback from your own site.