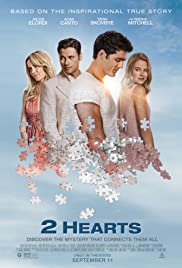 Greetings again from the darkness. We’ve seen it before. Two stories, seemingly unrelated, yet parallel. Only this time it’s based on a true story, and the 2017 book “All My Tomorrows” by Brian Gregory. Director Lance Hool and co-writers Veronica Hool and Robin U. Russin serve up a touching and inspirational story of how the lives of families can intersect, and how triumph can come from tragedy.

Admittedly, the film has a bit of Lifetime Movie Channel look and feel. It even begins with some conventional philosophy on life courtesy of our narrator: it’s either a miracle or it’s not, and life either happens to us or for us. These are neither particularly thought-provoking nor deep, however, they do set the stage well enough for the story. We first see an unconscious Chris Gregory (Jacob Elordi, THE KISSING BOOTH) being wheeled on a gurney into the surgical area of a hospital. His loved ones are obviously concerned. We then cut to a period many years earlier as a young Cuban boy passes out on a soccer field. We learn Jorge Bolivar has a lung disease, and has been told at various stages that he wouldn’t live past 12, 20, or 30 years old.

Despite the different time periods, we see the symmetry with the romantic interests of the men. Modern day college student Chris (also the film’s narrator) literally bumps into Sam (Tiera Skovbye, “Riverdale”), and the two become ‘Safety Buddies’ on campus – offering a ride to those students in need. An older Jorge (Adnan Canto, “Designated Survivor”) locks eyes with flight attendant Leslie (Radha Mitchell), which kicks off a whirlwind globe-trotting romance. Chris is a middle-class boy whose parents (Kari Matchett, Tahmoh Penikett) are loving and demanding. Jorge is part of a wealthy Cuban family forced to relocate to Miami due to political pressures under Castro.

Keeping up with the time period for Jorge and Leslie involves spotting the clothing styles and technology hints, and very few viewers won’t know where this is headed well before it gets there. The two staged weddings provide all kinds of cuteness, as does goofy, easy-going Chris. Life perspective is one of the key takeaways here, as is a fact that most people should already be well aware: organ donors make a difference and mean the world to those impacted. The film ends with a note on the Gabriel House of Care, a non-profit worth researching.

This entry was posted on Thursday, October 15th, 2020 at 6:54 pm and is filed under Comedy, Drama. You can follow any responses to this entry through the RSS 2.0 feed. You can leave a response, or trackback from your own site.