DRIVING WHILE BLACK: RACE, SPACE, AND MOBILITY IN AMERICA (2020, doc) 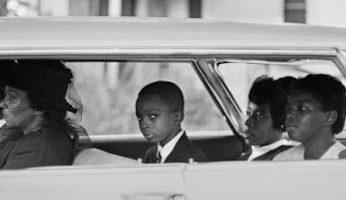 Greetings again from the darkness. When I was a kid, our family vacations consisted of loading up the car (with stuff and people) and hitting the road. Airline travel was not in the budget, and, at night, we typically piled everyone into one room at a low cost roadside motor inn (motel). We always had an ice chest, which allowed us to prepare most meals while on the trip … eating in a restaurant or café was a luxury that might happen once or twice on a trip. Why do I tell you this? Well because this is pretty much exactly how black people in this movie describe their long ago vacations. However, the few differences were substantial, to say the least. As a white family, we always had options for places to stop, while the black families were always concerned for their safety, and certainly never had the number of options we did. That anxiety and horror felt by blacks on the road in a racist society still exists today, and the history is expertly examined in this PBS documentary from author Gretchen Sorin and Ric Burns (brother of Ken).

We are told that the phrase, “Driving while black” covers much more than the time behind the wheel. It’s the constant concern for safety – while eating, sleeping, and living. The advent of affordable cars opened up the opportunity for blacks to answer the call of the road, and make memories with their families, but the constant fear never left. Mobility is emblematic of freedom, and the film goes back to the ‘forced mobility’ of slave ships and takes us through many progressions: slaves needing a note from their owner to cross the street, the Underground Railroad, the Fugitive Slave Act (the lit fuse to start the Civil War), the 1863 Emancipation Proclamation that freed blacks but left them nowhere to go, Reconstruction as a hopeful era, cotton and tobacco sharecropping, the rise of the KKK and the Jim Crow era, the booming Interstate Highway era – with the sacrifice of black neighborhoods, the Great Migration (north and west), how integration impacted Black culture, history, and heritage, and finally, how the cell phone age has opened many eyes.

Since this is a detailed history lesson, Ms. Sorin and Mr. Burns include terrific interviews with historians, writers, and journalists. Some of the archival video and photographs are stunning, and the film includes pertinent quotes from such dignitaries as Thurgood Marshall, W.E.B. Dubois, Richard Writer, James Baldwin, and Frederick Douglass. The photographs of actual lynchings are tough to look at, and the statistics provided are soul-crushing. As we hear people recount history with actual stories, it becomes very personal, rather than just title chapters in a social studies textbook.

Many “Black travel guides” existed, but it’s (NYC postal worker) Victor Green’s “The Negro Motorist Green Book” that is most well-known and the longest lasting. It contained “safe places” for blacks to stay, eat, and stop. The book could be found at many Esso stations, and we learn that it was published for more than 30 years. The fallout of integration meant that many black businesses failed as families moved to the suburbs … leaving only a very small percentage of ‘Green Book’ businesses with open doors.

An interesting segment on how the automobile industry, and Henry Ford in particular, led to the Great Migration of blacks from the south to the north (specifically Detroit). The promise of a job, decent pay, and independence were quite the draw. On the other hand, we see the many Chevrolet ads touting how the open road allows one to control their own destiny … but the folks in those ads were always white. This is a remarkable history lesson, and it’s very well documented. Today’s readily available cell phone footage has opened the eyes of the rest of us, so that we can understand the meaning of ‘Driving while black’.

The film premieres on PBS nationwide on October 13, 2020

watch the trailer on CNN:

This entry was posted on Tuesday, October 13th, 2020 at 8:24 am and is filed under Documentary. You can follow any responses to this entry through the RSS 2.0 feed. You can leave a response, or trackback from your own site.