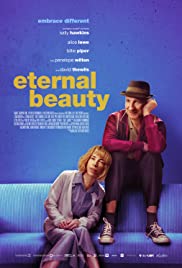 Greetings again from the darkness. There is an odd line early on in which the psychologist says, “Don’t fight depression. Make friends with it.” What makes this an odd line is that Jane is a paranoid schizophrenic, and depression doesn’t seem to be a driving force in her life. Craig Roberts wrote and directed the film (his second feature as director). You might know Mr. Roberts as an actor. He played the lead in SUBMARINE (2010). His approach as a filmmaker is one that keeps the audience off-balance; in fact, we can simply state this one is weird.

Sally Hawkins (THE SHAPE OF WATER, 2017) plays Jane. She lives on her own thanks to medication. Her family is present, though not especially supportive. A flashback takes us to Jane’s wedding day where a younger Jane is played by Morfydd Clark (THE PERSONAL HISTORY OF DAVID COPPERFIELD, 2020). Jane is spurned on her wedding day by her husband-to-be, and it pushes her over the edge emotionally and mentally.

An early scene gives us a peek at current day Jane. She brings wrapped Christmas presents to her parents’ house, and promptly hands over the receipts to each family member. She purchased her own gifts, acts surprised and grateful as she opens them, and expects her parents and sisters to repay her for the gifts. It’s quite a scene.

We follow Jane through her days as she seems to drift in and out of awareness and reality. She periodically hears her phone ring, and by answering she hears the voice of her former fiancé. The red phones match the phone she was on during her last conversation with him on her wedding day. It’s her most painful and visceral memory, and one that Jane can’t seem to overcome.

Relationships between the parents and the sisters are quite something to behold. Penelope Wilton (THE BEST EXOTIC MARIGOLD HOTEL, 2011) is the mother prone to cruelty and confusion, whereas the father (Robert Pugh, MASTER AND COMMANDER) nearly fades into the wallpaper, though seems more empathetic. Jane’s sisters Nicola and Alice are played by Billie Piper (“Penny Dreadful”) and Alice Lowe (GET DUKED!, 2020). Nicola envies Jane’s ability to collect free money (disability), while Alice is estranged from their mother, and claims her “normal” life is boring.

When Mike (David Thewlis from Charlie Kaufman’s latest, I’M THINKING OF ENDING THINGS) enters the picture, it’s like a jolt of electricity from touching the wrong wire. Mike is somehow stranger than Jane, yet they manage to connect. As an example of the film’s odd dialogue, when Jane asks Mike how things are going, he responds, “Things were looking up for a few weeks, a couple years back.” That’s the type of exchange we deal with throughout, and it takes an inordinate amount of energy to process what we see and hear.

One shot from cinematographer Kit Fraser is a particular standout. It comes from inside a microwave, replete with rotisserie base and Jane’s face peering through the glass. There are numerous moments we’ve not previously seen or heard in movies … like the doctor clarifying if the patient is “fine or good”. Ms. Hawkins delivers another strange, but affecting performance … something she has mastered over the years. She always makes the character hers, and makes us care about her. An added bonus is hearing Ricky Nelson sing “I Will Follow You” … slightly more soothing than David Thewlis’ frantic electric guitar performance. It seems certain that filmmaker Roberts agrees that normal is boring, and he ensures his film and characters are not.

This entry was posted on Thursday, October 1st, 2020 at 9:13 pm and is filed under Comedy, Drama. You can follow any responses to this entry through the RSS 2.0 feed. You can leave a response, or trackback from your own site.