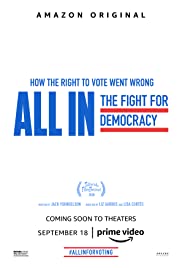 Greetings again from the darkness. Stacey Abrams is a generational spokesperson, and may very well be the future of the Democrat Party. This despite being recently passed over as Joe Biden’s running mate. Ms. Abrams is a producer on this film co-directed by Lisa Cortes (HIP HOP X FASHION, 2019) and Liz Garbus (nominated for 2 Oscars: WHAT HAPPENED MISS SIMONE?, 2015 and THE FARM: ANGOLA, USA, 1998). She also appears on camera numerous times speaking to us about voter suppression – something which impacted her directly.

The film provides an historical look at the different ways voters have been suppressed and elections manipulated over the years – dating back to 1789, when the film informs, only 6% of the population was eligible to vote: white male property owners. We hear from many historians, authors, politicians, and activists, yet it’s Ms. Abrams who stands out. She takes us through her personal background and describes in detail the influence her parents had on her. We also learn much about the 2016 Georgia Governor’s race, where Ms. Abrams faced off against Brian Kemp. In one of the more startling statistics, we are told that as Georgia Secretary of State, Mr. Kemp purged 1.4 million voters from the Georgia registry.

A true history lesson on voter suppression is provided, with much of the lesson and commentary provided by Ms. Abrams and author Carol Anderson, who wrote the 2018 book, “One Person, No Vote: How Voter Suppression is Destroying Democracy”. We also hear from others, including 88 year old Andrew Young, one of the leaders of the Civil Rights movement, and a former Mayor of Atlanta and former US Ambassador to the United Nations.

So many aspects of United States elections are discussed, and these include the Reconstruction era after the Civil War, the 19th Amendment, President Lyndon Johnson and Voting Rights Act, Gerrymandering, Voter ID requirements, Poll taxes and literacy tests, and the landmark 2013 case, Shelby County v Holder, resulting in a US Supreme Court decision that has impacted voter access. We see clips of the 30th anniversary of the Walk across the Edmund Pettus Bridge in Selma, Alabama, and it’s clear Civil Rights and Voting Rights are forever bound.

The documentary is important as it connects history with the modern day issues resulting in voter suppression. Ms. Abrams and Ms. Armstrong are vital voices on a topic that should have been laid to rest many years ago; yet as long as the thirst for political power exists, manipulation of the system will be attempted. So, it’s important that every citizen understand how this happens and what to be aware of.

Premieres at Telluride Film Festival September 2, 2020 and in select theaters on September 9, 2020, and on Amazon Prime beginning September 18, 2020

This entry was posted on Tuesday, September 8th, 2020 at 9:40 pm and is filed under Documentary. You can follow any responses to this entry through the RSS 2.0 feed. You can leave a response, or trackback from your own site.