THE PERSONAL HISTORY OF DAVID COPPERFIELD (2020) 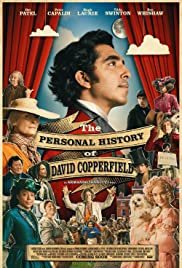 Greetings again from the darkness. One need not be a Dickens expert to enjoy this re-imagining of his “The Personal History, Adventures, Experience and Observation of David Copperfield the Younger of Blunderstone Rookery (Which He Never Meant to Publish on Any Account)”. Yes, that’s the novel’s actual title, so there is little wonder it’s typically referred to by only the main character’s name.

The film opens with David Copperfield (Dev Patel, SLUMDOG MILLIONAIRE) reading his autobiography to a mesmerized audience in a beautiful theatre. Yes, we hear the iconic opening line, “Whether I shall turn out to be the hero of my own life …”, and then Copperfield turns and walks into the backdrop which comes alive as he, in fact, steps into his own life. The film is episodic in structure as we are presented with segments of Copperfield’s life that shaped his writing – from his birth at The Rookery, to his inquisitive nature as a young boy, through his cruel banishment to factory work, on to his life living with his eccentric aunt and his time at boarding school, and finally, with his time as a proctor, courting Dora, and focusing on writing. It’s a fascinating life, with many elements pulled (or enhanced) from Dickens’ own.

Director Armando Iannucci (IN THE LOOP, creator of “Veep”) and co-writer Simon Blackwell are frequent collaborators renowned for their expertise in satire. Iannucci is an admitted fan and student of Dickens, and he’s assembled quite a sterling cast for his take on the classic story. In addition to Patel as the older Copperfield, we have Jairaj Varsani in his first film as young David, rising star Morfydd Clark (PRIDE AND PREJUDICE AND ZOMBIES, 2015) in dual roles including the enchanting Dora Spenlow, Hugh Laurie as the King Charles (and his head) obsessed Mr. Dick, Aneurin Barnard (DUNKIRK) as David’s friend Steerforth, Darren Boyd and Gwendoline Christie as the wicked Murdstones, Peter Capaldi (“Doctor Who”) as the dodgy Mr. Micawber, Daisy May Cooper as trusted handmaid Peggotty, Nikki Amuka-Bird as the concerned Mrs. Steerforth, Benedict Wong as the sherry-loving Mr. Wickfield, and Ben Whishaw is a standout as conniving Uriah Heep. And if somehow that’s not enough, the brilliant and eclectic Tilda Swinton shines as Aunt Betsey Trotwood.

Each of the segments brings something different to the party – some of it bleak, and some of it cheery. Of course the dialogue has dashes of humor, but much of the comedy comes courtesy of the talented cast. It’s been said of writers that they should write what they know, and David Copperfield literally writes what he lives … through piles of scraps of paper, each holding a moment of life or the essence of a character. Watching this is a bit like camping out in a writer’s head and twisting through their thoughts … Mr. Dickens would be proud.

This entry was posted on Thursday, August 27th, 2020 at 6:59 pm and is filed under Comedy, Drama, Fantasy. You can follow any responses to this entry through the RSS 2.0 feed. You can leave a response, or trackback from your own site.