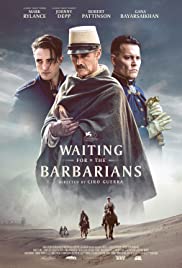 Greetings again from the darkness. Nobel Prize winning author J.M. Coetzee’s revered novel was first published in 1980, and renowned composer Philip Glass later adapted the South African writer’s work into a 2005 opera. It’s a fascinating piece of literature that, on the surface, doesn’t lend itself easily to the silver screen. Perhaps it works because Mr. Coetzee wrote the screenplay himself, and rising star director Ciro Guerra brings it to life. Mr. Guerra’s two most recent films were both excellent: BIRDS OF PASSAGE (2018) and EMBRACE OF THE SERPENT (2015).

Mark Rylance (Oscar winner for BRIDGE OF SPIES, 2015) stars as The Magistrate of a desert outpost on the fringes of territory controlled by ‘The Empire’. The Magistrate is mild-mannered and non-confrontational. He’s a fair administrator, and Rylance’s outstanding performance ensures he’s a sympathetic figure, yet not a perfect man. The Magistrate’s approach is to maintain a peaceful co-existence with the local nomads, who are described as ‘barbarians’ by others in The Empire.

Things change quickly and severely when Colonel Joll (Johnny Depp) arrives at the settlement. We see his approach thanks to cinematographer Chris Menges’ beautiful wide shot of Joll’s horse-drawn carriage surrounded by desert and mountains. Depp plays Colonel Joll as a stoic man committed to a mission he never fully states. Instead he sermonizes about his interrogation process with such gems as “patience and pressure” are the key, and “truth has a certain tone”. It’s not long before we learn, right along with The Magistrate, that Joll’s definition of ‘pressure’ would be termed torture and brutality by any reasonable person. His ruthless ‘interrogations’ lead to the result he was sent to obtain: the local barbarians are planning an uprising.

Director Guerra provides sub-chapters for the various seasons through which the story progresses. The Colonel arrived in “Summer” sporting sunglasses, and proclaiming “Pain is truth. All else is subject to doubt.” It’s a mantra that plays out in various ways. “Winter” brings ‘the girl”, a native with two broken ankles and other signs of torture. The Magistrate and the girl (Gana Bayarsaikhan, EX MACHINA) have an unconventional relationship, one that doesn’t go over well with Joll’s police force or the other locals, including Mai (Greta Scacchi), one of the loyal outpost staff members.

“Spring” is subtitled ‘The Return’, and it includes The Magistrate returning the girl to her people, and his subsequent return to the outpost where Joll’s second-in-command, Officer Mandel (Robert Pattinson), has him arrested and tortured for consorting with the enemy. Pattinson plays his role in wild-eyed contrast to Depp’s stoicism. When “Autumn” rolls around, it becomes clear that the real question is, “Who is the enemy?” or, perhaps, “Who are the real Barbarians?” The Magistrate is viewed as a traitor and laughingly referred to as “one just man”.

It’s frustrating at times to think about the modern day application of this story. What is an empire? The violence, narcissism, and lust for power lead to a loss of humanity that is painful to observe. Filmed in Morocco and Italy, the oppressive nature of the frontier makes this quite a downer, and one that requires effort and time to connect as a viewer. It also allows Menges and his camera to capture the details of the office and apartment, along with the sparseness of the jail … both in contrast to the vast frontier. This is a either a tale of morality or a cautionary warning shot that solidifies Joll’s adage. Perhaps pain is indeed required for truth.

This entry was posted on Thursday, August 6th, 2020 at 8:58 pm and is filed under Drama. You can follow any responses to this entry through the RSS 2.0 feed. You can leave a response, or trackback from your own site.