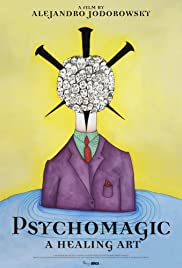 Greetings again from the darkness. Alejandro Jodorowski is a long-time avant-garde and visionary director known for cult classics EL TOPO (1970) and SANTA SANGRE (1989). He’s now 91 years old, and this is his first film since ENDLESS POETRY (2016) – only categorizing this as a “film” is a bit of a stretch. More in line with what we see would be, ‘a procession of demonstrations of Jodorowski’s own trauma therapy that he calls Psychomagic’.

Fortunately, we kick off with Jodorowski himself explaining his therapy. He defines Psychoanalysis, founded by Sigmund Freud, as being based on science and words. In contrast, he defines his Psychomagic as based on acts and touch. We then transition directly into an ongoing session – a sequence likely to be the last one many people watch, as only the most curious (or those charged with reviewing the film) will subject themselves to more.

The rest of the runtime is broken into “cases” distinguished by the specific reasons people are seeking treatment. Few can argue that treatments for emotional trauma can vary widely, and that not everyone will be affected the same, and that we should all be open to whatever works. However, I can assure you, Psychomagic treatment is unlike anything you have seen or experienced. These filmed sessions come off more like an acting workshop than therapy, though we are to assume they are legitimate.

Not to spoil anything, but rather to offer a taste of what’s in store, you should brace for full body shoe polish while dancing at night, the shattering of dinner plates on the patient’s chest in nature, pouring cold milk on an unclothed person, the simulation of birth for ‘grown ups’, sledgehammers on pumpkins decorated with family photos (OK, this one actually makes some sense!), sprinkling water on a massive tree to treat depression, burying a wedding dress, and participating in Mexico City’s Walk of the Dead. And I have skipped over the connection between menstruation and finger-painting and cellos.

Artists often thrive with great freedom, and the therapeutic effects of art have certainly been proven many times. It’s just that watching this, I became something beyond skeptical. It reminded me of the old-time healers, and the fine line between healing and scamming. Perhaps it was the regular inclusion of clips from Jodorowski’s films that put me on high alert, or maybe it was simply the progression of segments that each struck as more outrageous than the last. Jodorowski is an old man with a history of creating art, so I’m choosing to give him the benefit of the doubt, though it’s not an easy task after enduring this.

This entry was posted on Wednesday, August 5th, 2020 at 6:21 pm and is filed under Documentary, World Cinema/Foreign. You can follow any responses to this entry through the RSS 2.0 feed. You can leave a response, or trackback from your own site.