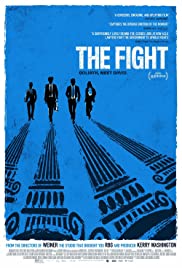 Greetings again from the darkness. The American Civil Liberties Union has been around since 1920. That’s 100 years of striving to be the stewards of our nation’s liberties. Eli B Despres, Josh Kriegman, and Elyse Steinberg are the three credited directors who bring us a behind-the-curtain look at the dedicated and hard-working ACLU attorneys in the New York office.

The film picks up on January 27, 2017, just seven days after President Trump’s inauguration and subsequent immigration order, also known as the “Muslim ban.” We are shown a sea of volunteer attorneys set up to assist affected immigrants – especially those seeking asylum. The basic premise of the movie is to provide a glimpse of the challenges faced by the ACLU against the Trump administration.

Since there have been approximately 140 lawsuits filed since this President took office, the filmmakers wisely focus on four specific cases, along with the assigned attorneys:  Garza v Hargan, which involves the right to an abortion for an immigrant minor; Stone v Trump, the administrations military ban of transgenders; Department of Commerce v New York, dealing with the “citizenship” question proposed for the U.S. census; and Ms. L vs ICE, a family separation case tied to a child taken from her mother at the border.

The cases are presented in an easy-to-follow manner, and we get to know each of the attorneys and their individual challenges, both with their specific case and their own personal or family life. Each of the attorneys provide their unique “tour” of the ACLU offices, and we quickly understand how they are focused on their own specialties, rather than the organization as a whole. One of them remarks that there are more tattoos and piercings present than at the DOJ, which underscores not just the age difference, but also the attitudes of these crusaders.

A very brief history of the ACLU informs us that their mission dictates they support civil rights for all, which means not just the 1967 interracial marriage of Richard and Mildred Loving, but also the Charlottesville Rally which resulted in the death of Heather Heyer. In keeping with protecting ‘everyone’s rights’, the organization has even defended the rights of Nazis. Still, it’s obvious where the organization stands when Brett Kavanaugh’s nomination for the Supreme Court is discussed … the attorneys admit it will make their jobs that much more difficult.

Despite attorney Lee Gelernt’s middle-age struggles with technology (somehow the dude can’t keep his cell phone charged), the dedication and commitment of these folks is on full display (they even celebrate with “train wine”). Court cases, by definition, have two sides, and since we aren’t allowed in the actual courtroom to witness the cases being presented, this film focuses on one side. Because of that, it often plays like a fundraising or recruiting video for the ACLU. Still, the behind-the-scenes view of what these attorneys go through to fight for liberty is fascinating and worthwhile.

Magnolia Pictures and Topic Studios will release the film VOD on July 31, 2020

This entry was posted on Thursday, July 30th, 2020 at 10:34 pm and is filed under Documentary. You can follow any responses to this entry through the RSS 2.0 feed. You can leave a response, or trackback from your own site.