CREATURE FROM THE BLACK LAGOON (1954) revisited 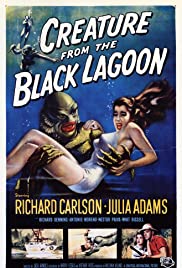 Greetings again from the darkness. This is another addition to my “revisited” series where I re-watch and then write about a classic movie. Why are “creature features” so appealing, and why was Universal so good at producing these movies that mesmerized me during childhood (and yes, still to this day)? The Universal Monsters of the 1930’s and 1940’s included such classics as Dracula, Frankenstein, The Mummy, The Wolf Man, The Invisible Man, and The Phantom of the Opera. Many cinematic iterations of these characters/creatures exist including sequels, remakes and contemporary re-boots, and there is something magical about the mystique and legend and lore behind each of the monsters. By the 1950’s, Universal was looking to revive the genre.

William Alland is credited with the idea for CREATURE FROM THE BLACK LAGOON. It’s a twist on the 1740 fantasy classic “Beauty and the Beast” from French novelist Gabrielle-Suzanne Barbot de Villeneuve. Mr. Alland is the film’s Producer, and years earlier he played reporter Jerry Thompson in Orson Welles’ CITIZEN KANE (1941). Maurice Zimm is credited with the story, and the screenplay was co-written by Harry Essex (IT CAME FROM OUTER SPACE, a Ray Bradbury story) and Arthur A Ross (an Oscar winner for BRUBAKER, 1980).

Quite similar to KING KONG, the story from Edgar Wallace and Merian Cooper, this movie follows a scientific expedition down the Amazon River where a prehistoric “Gill-man” (half man, half amphibian) is discovered and captured. The creature seems enraptured by Kay, the fiancé of one of the scientists – much like Kong was drawn to Ann Darrow. There is the expected battle between science and commerce: the value of marine life research vs the chance to make a pot of money. The feuding scientists also have to remain focused on the ongoing concern for the safety of those on the expedition … especially Kay.

Jack Arnold is remembered today as one of the great sci-fi movie directors of the 50’s. His work included THE INCREDIBLE SHRINKING MAN (1957), IT CAME FROM OUTER SPACE (1953) TARANTULA (1955), and the excellent Audie Murphy western NO NAME ON THE BULLET (1959). He also directed many episodes of some of the top TV shows of the1950’s, 60’s, 70’s, and 80’s. For this one, he deserves a great deal of credit for generating sympathy for the creature, by positioning him, not as the villain, but rather as the victim of a home invasion by the humans. Director Arnold also does a nice job early on of teasing us with footprints and fossils, and letting us hear about the legend, prior to actually seeing the creature.

For a movie that spends most of its time on a small boat named Rita, the cast is deep and talented. Richard Carlson (LITTLE FOXES, 1941) plays David Reed, the scientist engaged to Kay. Mr. Carlson dreamed of being a playwright, and had many guest starring roles on TV; however, “I Led 3 Lives” was his only starring role in a successful series. It was reportedly Lee Harvey Oswald’s favorite show. Co-starring here was Julie Adams (billed as Julia at the time) as Kay Lawrence, personal favorite of both David and creature. In the film she is stalked by the creature, even while she’s out for a leisurely swim in the Amazon (not recommended). Ms. Adams was a favorite on the cult movie circuit, and she died in 2019 at age 92. Having been crowned Miss Little Rock at age 19, she acted regularly into her 80’s, and even had a role at age 91, the year before she passed.

Richard Denning plays Mark Williams, the money man behind the expedition, and David’s boss and nemesis. He’s the one who sees dollar signs while capturing the creature. Mr. Denning served on a submarine in the US Navy during WWII. He starred with Cary Grant and Deborah Kerr in AN AFFAIR TO REMEMBER (1957), and then in the late 1960’s took an acting job as Governor on the original “Hawaii Five-0”, since he already lived in Hawaii. Mr. Denning’s wife, actress Evelyn Ankers, was known as “Queen of the Screamers” for her work as damsel in distress in many thrillers in the 1940’s (Wolfman, Frankenstein, Dracula movies).

Other cast members include familiar face Whit Bissell as Dr. Thompson. Mr. Bissell was a frequently working character actor from 1940 -1984 in TV and movies. He had over 300 credits, including I WAS A TEENAGE WEREWOLF (1958) with Michael Landon. Nestor Paiva plays Lucas, the Captain of the Rita, as a kind of Walter Brennan type. Mr. Paiva also appeared in more than 300 projects, and his wife was once employed as personal secretary to Howard Hughes. Antonio Moreno plays Carl Maia. Mr. Moreno had a huge career from 1912 to 1959, and was a rival of Rudolph Valentino for many “Latin lover” roles. The film’s narrator, Art Gilmore, became known for his narration and voice acting in shows such as “Dragnet”, “The Waltons”, “Adam-12”, “The Red Skelton Hour”, “The Roy Rogers Show”, and many more.

Of course everyone who watches the movie wants to know more about the creature. Well, two actors were involved. Ben Chapman, who was a Marine during the Korean War, played the creature on land, while Ricou Browning played the Gill-man we see in the water. Mr. Browning was also the co-creator of the popular TV series “Flipper” (1964-67), and directed the iconic underwater scenes in the James Bond classic THUNDERBALL (1965). Also involved here were a young Henry Mancini as uncredited composer and cinematographer William E Snyder. Mr. Mancini was a 4 time Oscar winner best known for his iconic “Pink Panther” theme, and Mr. Snyder achieved 3 Oscar nominations

Director Arnold insisted on shooting the film in 3-D, despite its low budget, and over the years, it became quite a cult classic (with its’ own festivals). There is even a scandal associated with the film. For many years, Hollywood make-up legend Bud Westmore took credit for the design of the creature. It took more than 50 years, but Mallory O’Meara’s book, “The Lady from the Black Lagoon: Hollywood Monsters and the Lost Legacy of Millicent Patrick”, finally allowed Ms. Patrick (pictured, left) to receive due credit for her design work. Sequels to the film included: REVENGE OF THE CREATURE (1955), and THE CREATURE WALKS AMONG US (1956), but it was perhaps director Guillermo del Toro’s stunning THE SHAPE OF WATER (2017) winning the Oscar for Best Picture, that brought CREATURE FROM THE BLACK LAGOON back into prominence. This allowed a new generation of movie lovers to behold the classic sequence of the creature’s synchronized swimming just below Kay in the murky Amazon water. What a sight!

This entry was posted on Sunday, July 26th, 2020 at 1:16 pm and is filed under Articles, Classics, Fantasy, Horror, Sci-Fi, Thriller. You can follow any responses to this entry through the RSS 2.0 feed. You can leave a response, or trackback from your own site.