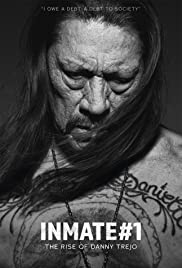 Greetings again from the darkness. It’s easy and convenient to lump folks into the old adage “people don’t change”, because not changing is the easiest way. However, we’d be hard pressed to find someone who fits the “turned over a new leaf” description better than Danny Trejo. He has certainly made the best of his second chance … and he knows it. What makes his story inspirational is his willingness, no make that determination, to share his own story in hopes that he can help others.

Director Brett Harvey surprises us in a couple of ways with this documentary. First, he spends the first two-thirds on Trejo’s background, with barely a mention of movies. Second, he recognizes the gold to mine here is derived from Trejo himself, and he allows the man to talk and show us what he’s all about. Sure, we get bits of insight from Trejo’s neighborhood friends, his acting peers, and his own kids and sister, but no one can tell Trejo’s story better than Trejo. In fact, director Harvey bookends the film with Trejo talking to convicts, and beginning with “my number was B-948.”

While cruising around town in his 1956 Chevy Bel Air, Trejo points out “Richie Valens Junior High”, which is actually Pacoima Middle School. It’s fascinating that he still lives in the same area in which he was raised, especially after we hear him recall his childhood. As a kid, his hero was Uncle Gilbert – the cool guy who had money, cars, and girls. Trejo stuck like glue to Gilbert, who turned the boy onto weed at age 8 and heroin at age 12, and then transitioned him to armed robbery (including a live grenade!). It was four bags of sugar sold to an undercover cop that sent Trejo to San Quentin.

Trejo is very direct as he discusses his time in prison and what occurred to push him towards getting his life in order. He mentions it’s not about reform, but about keeping a promise. He talks about the ‘predator or prey’ aspect of prison and recalls some of the best advice he received: remaining on the path of drugs-alcohol-crime can only lead to death-insanity-jail. He absolutely believes these words and works this in to his motivational speeches to this day.

He stumbled backwards into an acting career, simply by visiting a friend on the set of RUNAWAY TRAIN (1985). His look and that tattoo were instrumental to his acting gigs, and that’s where the title of the documentary comes from – he was cast as “Inmate #1” in the early days. Of course, things really exploded for him after his second cousin, director Robert Rodriguez, cast him as the silent assassin in DESPERADO (1995), and then again when Trejo got the lead in the tongue-in-cheek MACHETE (2010) which spawned from a fake trailer in the Rodriguez-Tarantino blend GRINDHOUSE (2007).

One of those interviewed states, “They make movies about guys like him”, and by the time the documentary ends, we simply with there were more people like Danny Trejo in society. It’s rare that we find such respect for an actor after getting to know what they are like “in real life.” He may joke about learning acting at the San Quentin School of Dramatics, but he spends most of his time doing good for others. His infectious laugh and upbeat demeanor are traits of a man who appreciates his second chance in life. Just keep in mind, “Machete don’t text.”

This entry was posted on Monday, July 6th, 2020 at 10:52 pm and is filed under Documentary. You can follow any responses to this entry through the RSS 2.0 feed. You can leave a response, or trackback from your own site.