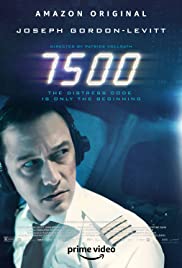 Greetings again from the darkness. The first airplane hijacking movie I remember seeing was AIRPORT (1970, with Burt Lancaster and Dean Martin). Since then, it’s been a recurring, relatively common cinematic topic blending our natural fears (flying and terrorism) with our love and admiration of heroic people, as seen in such films as EXECUTIVE DECISION (1996) and AIR FORCE ONE (1997).  Writer-Director Patrick Vollrath (first feature length film, Oscar nominated for his excellent 2015 Live Action Short EVERYTHING WILL BE OK/ Alles Wird Gut) and co-w Sanad Halibasic use some of the familiar tropes we’ve come to expect, but do so with a unique twist … the camera never leaves the cockpit (at least until the very end).

Joseph Gordon-Levitt stars as Tobias Ellis, the co-pilot to Captain Michael Lutzman (Carlo Kitzlinger) on this scheduled short flight from Berlin to Paris. Tobias is an American based in Berlin, living with his Turkish girlfriend Gokce (Aylin Tezel) and their young son. Gokce is also a flight attendant on the flight, and the two have attempted to keep their relationship a secret from their co-workers and employer.

The film opens with a quote usually attributed to Gandhi, “An eye for an eye leaves the whole world blind.” We then get a couple minutes of Berlin Airport security footage as passengers and their carry-ons proceed through security lines. We hear no dialogue or sound. The first actual scene puts us inside the cockpit as the flight crew arrives.

Not long after a smooth takeoff, the terrorists rush the cockpit when the flight attendant is delivering water to the pilots. A fight ensues resulting in injuries, including to both pilots. The crisis quickly escalates as Tobias has to take over flying the plane, while dealing with the pressure of a life-altering dilemma: does he follow protocol and keep the door shut, or does he hopefully save passenger lives by opening the door? The tension mounts as Tobias (and us) views the actions of the terrorist through the small cockpit monitor.

The film’s title is derived from the pilot’s Squawk code of 7500, which notifies the Air Traffic Controller of a hijacking-in-progress. As we learn, these aren’t the usual hijackers. These are extremists who are “avenging the deaths of Muslims.” These terrorists prove they aren’t afraid to kill, and proclaim they are “not afraid to die.” Well, all except one of them. Nineteen year old Vedat (Omid Memar) is the terrorists’ translator, and he’s left frantically trying to make the best of a bad situation, despite no real plan. His clouded-thinking exacerbates the situation as he tries to deal with the police negotiator.

What gives the film appeal is the ‘camera in the cockpit’ trick and the tension of the moment. The space is cramped and claustrophobic. Showing the crew going through the pre-flight checks allows us to get our bearings in an unfamiliar setting. To this non-pilot, the sequence delivers a very authentic look and feel. Spending the entire time in a confined space recalls such films as BURIED (2010), LOCKE (2013), and Hitchcock’s LIFEBOAT (1944). Joseph Gordon-Levitt carries most of the film with his performance, as he’s rarely off camera. His temperament during chaos is fun to watch, but the final act is just a bit overwrought, and some of the good from the first two acts unravels a bit. Still, the close-quarters of a cockpit makes a unique viewing experience, and one that has us asking how we would react in this situation.

This entry was posted on Thursday, June 18th, 2020 at 10:00 pm and is filed under Thriller. You can follow any responses to this entry through the RSS 2.0 feed. You can leave a response, or trackback from your own site.