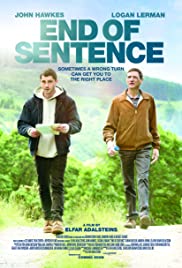 Greetings again from the darkness. The pandemic has put most blockbusters and mainstream releases on hold, allowing the projects of many first time filmmakers to jump to the front of the line for exposure to critics and streaming platforms. Director Elfar Adalstein’s first feature film stems from a screenplay by Michael Armbruster (BEAUTIFUL BOY, 2010) and covers familiar ground in an unfamiliar manner, enhanced by gorgeous scenery and a couple of terrific performances.

Frank Fogel (John Hawkes, WINTER’S BONE, 2010) and his wife Anna (Andrea Irvine) are visiting their son Sean (Logan Lerman, THE PERKS OF BEING A WALLFLOWER, 2012) in an Alabama prison. Sean is serving time for stealing a car, and his mother is there to tell him goodbye. Frank and Sean are estranged, so there is no father-son visit. After the funeral, Frank shows up on Sean’s day of release to convey the mother’s death bed wish … father and son are to travel together and spread her ashes on her favorite lake in Ireland. Sean has no interest in traveling with dad and only wishes to get to California for a fresh start.

Of course there would be no movie if the two men didn’t eventually take the trip together, and we notice immediately that Frank, though a man of conviction, doesn’t appear to have a strong backbone. Sean, acting the jerk, clearly holds a grudge against the father he views as not protecting him from an abusive grandfather during childhood. These are deep wounds that may go deeper if there is to be a chance for healing. A wake in mom’s Ireland hometown reveals secrets of her past, and results in the men taking in Jewel (Sarah Bolger, one of the young daughters in Jim Sheridan’s excellent IN AMERICA, 2002) as a hitchhiker. Jewel has her own secrets and agenda, and seems to both further divide father and son, while also helping pull them together. This segment is very well written and acted.

The father-son road trip is really nothing new, though the setting of Ireland, with its stunning countryside captured by cinematographer Karl Oskarsson make it a visual treat. But more than that, the basic story is elevated thanks to the work of Mr. Hawkes (a previous Oscar nominee) and Mr. Lerman. The two excellent actors make the strained relationship seem real, rather than hokey or manipulative. We sense Frank’s pain in discovery, and Sean’s pent-up frustration that softens when he learns more of the history. On the downside, three musical/song interludes is two too many, but fortunately the performances overcome these storytelling shortcuts. Self-discovery, the acceptance of others, and the importance of family ties are all at play here, in addition to some quirky life philosophy: “Sometimes you’re the pigeon. Sometimes you’re the statue. That’s life.”

This entry was posted on Thursday, May 28th, 2020 at 10:00 pm and is filed under Drama. You can follow any responses to this entry through the RSS 2.0 feed. You can leave a response, or trackback from your own site.