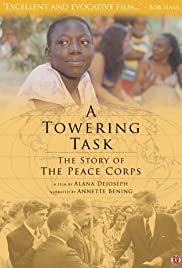 Greetings again from the darkness. The PSAs that frequently popped up on my childhood TV are vivid memories, though it took many years before I had any concept of what the Peace Corps was, how it was formed, and what it did. Director Alana DeJoseph, herself a Returned Peace Corps Volunteer (RPCV), and writer Shana Kelly want to make sure we all know the history of the organization, what its mission has been for almost 60 years, and most importantly, that the Peace Corps still exists today.

William J Lederer and Eugene Burdick co-wrote the 1958 political novel “The Ugly American”, and the best-seller had a surprising effect on John Kennedy’s ability to get The Peace Corps established not long after he became President of the Unites States.  In 1961, President Kennedy named his brother-in-law, Sargent Shriver, as the organization’s first director. Shriver was a passionate leader and served as the director into 1966. We see archival footage and photographs of Shriver’s time with the Peace Corps, and learn that a memo from his task force was responsible for the phrase “A Towering Task”, a recurring reference over the years, and the title of this film.

From the beginning, there were vocal skeptics. An escape plan for ‘draft dodger’ is how many cynics labeled The Peace Corps, and it was a difficult label to shake. We learn that in the beginning, four out of every five applicants was denied admission, and the footage of those early training regimens looked more like the Marines than a volunteer service organization. Still, many were attracted to the stated mission: Promote World Peace and Friendship, a mission that remains in place today.

In addition to the treasure trove of archival footage and speeches, there are many interviews with authors, former volunteers, and many of the directors who have served. We view some of the recruiting films and PSAs and travel through the procession of US Presidents from Kennedy through Trump, and explore the various challenges faced by the Peace Corps. One of the more in-depth segments involves the longest-serving former director Loret Miller Ruppe, who was director from 1981-89. Her recounting the story of the Prime Minister of Fiji and his words to Ronald Reagan are a highlight.

Ms. DeJoseph and Ms. Kelly have delivered a most-informative history of the Peace Corps in a matter-of-fact manner. Four-time Oscar nominee Annette Bening serves as the narrator, and her work is serviceable, though lacking in energy. The film is neither propaganda nor a hard sell for volunteers, and it’s not what one would call entertaining. Instead, it serves as a detailed timeline of this important agency, and that is an important step for posterity.

Available in Virtual Cinema beginning May 22, 2020

This entry was posted on Thursday, May 21st, 2020 at 8:27 am and is filed under Documentary. You can follow any responses to this entry through the RSS 2.0 feed. You can leave a response, or trackback from your own site.