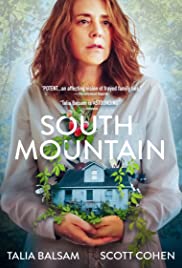 Greetings again from the darkness. The grill is fired up and the beer is cold. Friends and family are gathered in the Catskills. Everything seems pretty normal until writer Edgar (Scott Cohen) sneaks off to take a “work” call in the privacy of a back room. We see the reality of his FaceTime call with his mistress Gemma (Isis Massoud), who is in full baby delivery mode. Edgar talks her through it as the midwife does her thing. The delivery and baby are so realistic that I’m fairly certain writer-director Hilary Brougher has included actual footage.

Talia Balsam stars as Edgar’s wife Lila, an artist and teacher. There is a sadness connected to Lila, and it hovers like a curse. Her initial reaction to being told that Edgar is leaving her for a new life is little more than resignation to her own life where she seems to regularly get the short end. Edgar and Lila have a teenage daughter Dara (Naian Gonzalez Norvind), and daughter Sam (Macaulee Cassady) from Edgar’s first marriage. We learn that Talia has previously endured Edgar’s wanderings, though not always gracefully. She also wonders why people are constantly leaving her – a fact of life as kids grow older.

Filmmaker Brougher counts off the days in the corner of the screen for us, and it’s helpful as time jumps a bit … although most days seem eerily similar even after Edgar leaves (he’s still around a lot). This plays out like a passive-aggressive break-up, save for one unpredictable lash-out from Lila – one that is likely a frequent fantasy of wronged spouses. Lila’s close friend Gigi (Andrus Nichols) has breast cancer and is undergoing chemotherapy, and her son Jake (Guthrie Mass) and daughter Charlotte (Violet Rea) add to the teenage angst we see from Dara and Sam. Sam’s friend Jonah (Michael Oberholtzer) has a key role as well – one that starts with sharing a sauna with Lila, and ends where you would imagine.

There is no shortage of movies or real life stories of middle-aged men starting over and “women of a certain age” are left to figure things out. Ties of a long-term marriage run deep and aren’t easily or cleanly severed; and kids, regardless of age, don’t always understand how to be supportive. Cinematographer Ethan Mass (husband to Ms. Brougher) does a terrific job with the visual landscape, as the claustrophobia of the house gives way to the stunning beauty of nature. The acting is superb throughout, and Ms. Balsam (daughter of Martin Balsam and Joyce Van Patten) excels in a rare leading role. If only the material were a bit more complex, she could be in awards consideration. Unfortunately, the restrained storytelling prevents us from connecting to Lila, despite the best efforts of Ms. Balsam. It’s clear Hilary Brougher is a filmmaker with talent, but the message that life goes on, no matter the inconveniences or heartbreaks, is just a bit too familiar and low key.

This entry was posted on Monday, May 4th, 2020 at 5:23 pm and is filed under Drama. You can follow any responses to this entry through the RSS 2.0 feed. You can leave a response, or trackback from your own site.