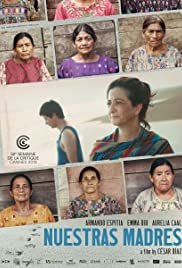 Greetings again from the darkness. Every war is ugly and devastating, and few lasted as long as the Civil War in Guatemala, which ended in 1996 after many years and many deaths. Its history tracks back to the early 1960’s, and the fighting between the government and various leftist rebel groups was violent, resulting in more than 200,000 deaths (mostly Mayan) in the 1970’s and 80’s. In his first narrative feature, writer-director Cesar Diaz chose not to examine the causes of war, but rather the fallout … the tattered lives left in its wake.

Armando Espitia stars as Ernesto, a young anthropologist at the Forensic Foundation – an institute that specializes in locating, identifying, and carefully packaging the remains of the casualties of war. It’s 2018, and the news reports we overhear call this an “historic moment”, as war criminals are brought to trial. The film opens on Ernesto as he is assembling the skeletal remains taken from a mass burial site that the Institute was recently permitted to excavate. We soon learn that Ernesto has his own personal mission – finding out what happened to his father, who is identified only as a guerilla fighter. Ernesto’s mother (Emma Dib), with whom he lives, discourages him from searching for his dad. He states ‘I need to know’, while she says ‘I don’t wish to remember.’

Director Diaz includes a gut-wrenching sequence of women in a local village. It’s almost like a series of photographs … a lineup of local woman who are victims of the war. The work of cinematographer Virginie Surdej is extraordinary in this sequence. These aren’t actors, but rather natives to the area – women whose weathered faces show the story being told by the movie. They lead Ernesto to a mass grave on private land where many of the slaughtered men and children are buried. The atrocities toward the women were often worse than death, and now they are going about living, fully aware that their loved ones never received the respect in death that is so valued.

Ernesto takes statements from the women, and is so devoted to finding his father that his social life consists of sleeping in his car and fantasizing about the local bartender. Ernesto and the women, who are the face of war, are simply looking for closure. They want dignity for the dead, and he wants to know his roots. There is much family pain and pride, and often when family secrets gets solved, the result is more pain than relief. Director Diaz was born in Guatemala and delivers a mostly quiet film that is only 78 minutes in run time, but its message rings loud and clear … the horrors of war don’t end when the war does. The film was a multi-award winner at Cannes, and justifiably so.

This entry was posted on Thursday, April 30th, 2020 at 5:45 pm and is filed under Drama, World Cinema/Foreign. You can follow any responses to this entry through the RSS 2.0 feed. You can leave a response, or trackback from your own site.