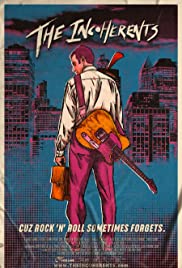 Greetings again from the darkness. If you have yet to experience a mid-life crisis, it only means you haven’t lived long enough. Of course, this ‘crisis’ often has little to do with age, and can seep into your marrow at any time … even when you think your life is plodding along just fine. These little thoughts or doubts or ideas start creeping in, and soon the only thing on your mind is a sports car, a younger partner, traveling the world, writing a novel, changing careers, or yes, starting a rock band.

Meet Bruce. He’s working a dead-end job as a 40-something year old paralegal. He’s married to the lovely Liz and they have two children and a fine house. Bruce’s boss takes advantage of his lack of ambition by assigning menial tasks and requiring overtime. When a burned-out Bruce arrives home in the evening, he sees the ‘To-do’ list his wife has posted on the fridge, and he guzzles a beer before heading down to the basement to play music and write songs. It’s his escape from life, but also his tie to younger years when he and his buddies had a legitimate band named The Incoherents.

Jeff Auer stars as Bruce, and he also wrote the screenplay. When his wife Liz (Kate Arrington) green-lights his dream of getting the band back together, Bruce contacts the Hamilton brothers, drummer Tyler (Ben Foster lookalike Casey Clark) and bass player Keith (Walter Hoffman), and they all meet up at the pub owned by their former lead guitarist Jimmy (Alex Emanuel, also the film’s Music Director and a Producer). The long-standing riff between Jimmy and Bruce dates back to the band’s initial run, but soon the chill warms and the band is rehearsing at Annette O’Toole’s studio. She calls them a “lost cause.”

The (middle-aged) boys enjoy playing gigs, but can’t seem to draw a crowd thanks to their utter ignorance of marketing or social media. Enter Jules (Vincent Lamberti), an agent of by-gone years who is blunt in his assessments, even if he seems to bring little else to the band. While all of this is happening, Liz is pushing to open her own long-wanted graphic design business. The idea of both spouses pursuing their dreams is quite intriguing, but the film misses a huge opportunity by focusing almost entirely on Bruce and the band. Liz is left with the scraps of a few reaction scenes (a waste of Ms. Arrington’s talent).

This is director Jared Barel’s first feature film, and it’s likely many of the missteps will be avoided in future projects. Bruce is front and center for most of the run time, but there are other characters who seem to be much more interesting – though most of their backstories are simple teases. On the bright side, the dream of being a rock star is the dream of many, as is recapturing the vitality of a youth long passed. So the relatability factor is present.

Bruce and Liz have 2 kids, which are treated mostly as after thoughts that only come in to play when both parents have something they want to do on the same weekend. Somehow the $80 for a babysitter becomes an obstacle that can’t be overcome … this despite the band’s numerous $30 per rehearsal hour in the studio and Liz’s plane trip to attend her sister’s book signing and put together a business plan. Very little of the real world stuff makes sense, which leaves the band part feeling a bit superfluous and hokey. Amy Carlson (“Blue Bloods”) has an awkward scene as a super-promoter, and we do get see Fiona Silver perform. There are some good ideas here, but it feels like the filmmakers were a bit too close to the project for it to ever really click.

This entry was posted on Wednesday, April 29th, 2020 at 5:38 pm and is filed under Comedy, Drama. You can follow any responses to this entry through the RSS 2.0 feed. You can leave a response, or trackback from your own site.