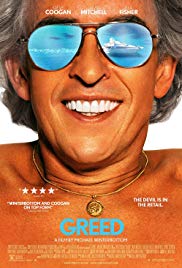 Greetings again from the darkness. “Greed for lack of a better word, is good. Greed is right. Greed works.” Those words were part of the iconic speech from Gordon Gekko (an Oscar winning role for Michael Douglas) in Oliver Stone’s 1987 film WALL STREET. Here we are 3 decades later, and there may not be a more tarnished word, attitude, or approach than ‘greed’, and filmmaker Michael Winterbottom re-teams with his “The Trip” collaborator Steve Coogan to deliver satire on today’s ultra-rich.

The always entertaining Mr. Coogan stars as Sir Richard McReadie, also known in the media by numerous other names like: Greedy McReadie, McGreedy, The King of High Street, and The Monet of Money (a label he seemingly applied to himself). Sir Richard is apparently modeled after fashion mogul Sir Philip Green (owner of Top Shop), and with his fake tan and blinding white teeth caps, makes a pretty easy target for Winterbottom’s bashing of the too-rich.

A loose structure to the film is provided by the contrast of the coordination and excess going into planning McReadie’s upcoming 60th birthday toga bash on the Greek isle of Mykonos, and the official inquiry by Parliament into his questionable business practices. Scenes from the committee hearings are interspersed throughout the film, along with some flashbacks to young McReadie (played by Jamie Blackley) honing his negotiation skills. There is also McReadie’s hired biographer Nick (played by David Mitchell), a spineless freelancer thrilled to have the job, despite his initial obliviousness to what McReadie is all about. Although Nick does uncover some of the cruel labor practices, the character seems to be a way for Winterbottom to poke at journalists simultaneously to his scalding the rich. Celebrities for hire also take shot to the bow.

Isla Fisher plays Samantha, McReadie’s ex-wife, whose Monaco residence helps hide the family/ex-family fortune. The relationship between these two is not just creepy on the balance sheet, but plays out in ways apparently acceptable to the lifestyles of the wealthy. Asa Butterfield plays their overlooked and underappreciate son Finn, and the always fabulous Shirley Henderson plays Irish mother Margaret in such a way that we wish more of the movie was about her. McReadie’s daughter Lily (Sophia Cookson) is pretty funny as she films her Reality TV show in the midst of her father’s party preparation … which includes Bulgarian workers building a replica of a Roman amphitheater to act as the site of a GLADIATOR reenactment – replete with a live lion (not a tiger)!

Sarah Solemani and Dinita Gohil play two of McReadie’s key assistants, and provide us a glimpse of how real people struggle to work amidst such waste and ego and unrealistic expectations. McReadie kinda quotes Shakespeare, but we feel certain he’s not a well-read man. Instead his talents are in bending a system and forcing others to acquiesce to his demands. The tabletop shell game he mastered as a parlor trick is really just a miniaturized version of his business empire … trading one highly-leveraged enterprise for the next, while cashing in on the process.

Winterbottom’s approach is often confusing and sometimes drifts towards mockumentary for flashbacks and interviews. It’s an uneven comedy that works at times, and doesn’t at others – not uncommon for satire. Coogan makes McReadie always fun (in a disturbing way) to watch, though the film never clicks better than the Keith Richards moment near the end. The anger-based acidic comedy satirizes what’s happening in the real world, and tries to further expose how the mega-rich take advantage of the rest of us. Some well executed bits make this one worth watching, but really offers little in the form of insight or solutions. Instead it’s just infuriating … at least in the parts where we aren’t laughing. We certainly don’t laugh over the closing credits as real world statistics are provided regarding inequality and third world labor.

This entry was posted on Thursday, March 5th, 2020 at 10:55 pm and is filed under Comedy, Drama. You can follow any responses to this entry through the RSS 2.0 feed. You can leave a response, or trackback from your own site.