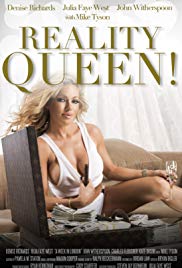 Greetings again from the darkness. While we can’t dismiss it, we can surely question the popularity of those who have reached celebrity status via Reality TV or Social Media presence. Are these folks brilliant or simply cashing in on the ignorance and gullibility of the American public? That’s the core question asked in this mockumentary from first time director Steven Jay Bernheim (and his 7 credited co-writers).

Thanks to shows like “TMZ” and “Entertainment Tonight”, sites like Instagram, Twitter, and YouTube, and the seemingly endless supply of Reality TV series, it’s no wonder we have come to accept that people can get famous for being famous. Julia Faye West (a no-holds barred performance) stars here as London Logo, a “celebutante” who has reached the pinnacle of fame by flaunting her lifestyle of excess. The obvious comparisons are Paris Hilton and the Kardashians. As with these real life celebs, we learn much more about London Logo than we would prefer to know. And that’s where the fun begins.

And by fun I mean the type of twisted comedy presented by a mockumentary that has us questioning why our society heaps so much attention on those represented here by London Logo. She has her entourage comprised of actor-friend Angelina Streisand (Denise Richards), her image-salvaging PR manager Winston Spritz (Loren Lester), her personal designer Simon Debris (John R Colley), and her manager/agent Louis Lozenger (Ben Begley). You have likely noticed that the character names are punchlines unto themselves. Adding competition to the incredulity is London’s nemesis and arch-rival Kristy Kim (Candace Kita), one of the Kim sisters from the (pretend reality) show “Katching Up with the Kims”. One of Kristy’s most prominent features is her large hind-quarters, making her real life comparison quite easy to place.

Most of the film is based on the “tell-all” documentary being filmed by British TV journalist Diana Smelt-Marlin (Kate Orsini), who affords London every opportunity to explain her actions and motives. The interviews are pure gold in eye-opening (and eye-rolling) cluelessness. This is the documentary that makes this an effective mockumentary. The cameras follow London around as she tries to bounce back after the Kims have stolen “her thunder”, and a beach incident captured on camera sends London to jail.

Book deals, TV shows, cosmetics, music drops, private jets, Twitter followers … all of these play a part in London’s attempt to keep her name in lights. Along the way we are treated to some outlandish bits. These include her pet gerbil getting stuck in the toilet (and the first Richard Gere joke in years), which results in a visit from Joe the plumber played by the recently deceased talented character actor John Witherspoon. There is also a Larry King style talk show host (Charles Fleisher), regular ‘breaking news’ from a TMZ knock-off, hilarious throw-pillows, London’s “traumatic brain injury”, unfortunate spelling errors, an opportunistic pet whisperer, and a questionable celebrity stalker.

London’s wealthy parents are played by Jill Jacobson and Cliff De Young. Dad is at a loss of words when asked to describe his daughter, while mom proudly states “busty”. London even attempts to reconcile with her TV partner played by Shelli Boone, in an attempt to reunite for their “Heir Heads” show (you have to say it out loud). Ralph Rieckermann, former member of the rock band The Scorpions, plays a DJ named Messiah, and the titles of competing books by London and Kristy are not to be missed. Boxing legend Mike Tyson makes an appearance attempting to provide evidence showing that he was not the other participant in the sex tape titled “A Night in London” … and his evidence is pretty compelling.

Mr. Bernheim’s film not only stars his wife (Julia Faye West), but it also points out just how much work is involved in getting and staying famous. It’s a full-time job! There are so many gags throughout, and of course, most of the acting is purposefully over-the-top. These days, it’s almost impossible to take things too far … what captures the attention of the American public is usually about as disappointing as finding out the world’s smallest dog isn’t really a dog, and that hipsters aren’t homeless …they just look that way. The best advice here is to sit back, relax, and spend an evening laughing at our society. So many already are.

This entry was posted on Thursday, January 9th, 2020 at 7:30 pm and is filed under Comedy. You can follow any responses to this entry through the RSS 2.0 feed. You can leave a response, or trackback from your own site.