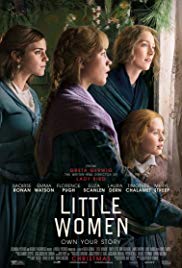 Greetings again from the darkness. More than 150 years have passed since Louisa May Alcott’s novel was published (volume 1 was published in 1868, volume 2 in 1869). By my count, there have been seven previous movie adaptations, dating back to the silent film era and through the more familiar George Cukor-Katharine Hepburn (1933), Mervyn Leroy-June Allyson (1949), and Gillian Armstrong-Wynona Ryder (1994) versions. One might think that sufficient, yet, after viewing this latest, you’ll likely join me in believing that director Greta Gerwig and Louisa May Alcott (and by natural extension Jo March) are kindred spirits … timeless storytellers of the moment.

Oscar nominated (writing and directing) for her standout LADY BIRD (2017), Ms. Gerwig remains true to the beloved source material while adding her own contemporary touch. She begins with the adult March sisters and then flashing back 7 years to the stage of living together and battling through the difficult and awkward transitional phase. The four sisters Jo (Saoirse Ronan), Meg (Emma Watson), Amy (Florence Pugh), and Beth (Eliza Scanlen) are exceptionally well cast, and we immediately recognize the familiar personality traits of each. Jo is the serious, determined writer who has an understanding of financial necessities. Meg is the warm facilitator beloved by all. Amy has ambitions (or is it dreams?) of being a great artist and living an exceptional life. Beth, the youngest, radiates a sweet nature and love for the piano.

Much of the story is told through the eyes of Jo. Her independent spirit and frustration with how the world is, boils over at times. She states her disappointment at being born a girl, and is described as having “a nature too noble to curb.” While viewing, one must keep in mind that this was the Civil War era (the girls’ father is a military Chaplain), and women had achieved very few rights in society. The contrast is never more evident than when comparing Marmee (Laura Dern), presented here as a near flesh-and-blood saint, with Aunt March (Meryl Streep), one quite at ease in thumbing her nose at societal norms for one reason … she is rich.

Fans of the novel will be pleased that Timothee Chalamet plays “Laurie Laurence”, who struggles every bit as much as the sisters in finding his way towards adulthood. His scenes with Jo are exceptional. Chris Cooper, not seen nearly enough in movies these days, perfectly captures the broken spirit of Mr. Laurence, a man never quite able to escape his own personal loss. Other key cast members include James Norton as tutor/teacher John Brooke, Louis Garrel as Friedrich (here a Frenchman), and Tracy Letts dropping some deadpan comedy as Jo’s publisher Mr Dashwood.

Ms. Gerwig (perhaps with a future as one of the greatest filmmakers) displays storytelling and cinematic craftsmanship at the highest level. She bounces between timelines (over at least 7 years) and different sisters’ stories, showing how each is so different … yet all interconnected. These spirited sisters, raised in the same modest home, have their own independent thoughts and ideas of how they want to live their lives. This delivers multiple comings-of-age and examines ‘a woman’s place’, whatever that means. In fact, the message is that a woman’s place is whatever she decides, and while her options are many (despite obstacles), her decisions are personal. None of the four sisters are played by American actors, and all four perform admirably. Pay particular attention to Florence Pugh (MIDSOMMAR) and her work as Amy. Also impressive is the Production Design by Jess Gonchor and the score by 2-time Oscar winner Alexandre Desplat. This one is all about the storytelling and characters, so take in the bunch known as the March sisters. As a side note, Greta Gerwig’s next movie is a live-action BARBIE movie, with Margot Robbie in the lead.

This entry was posted on Monday, December 23rd, 2019 at 9:37 pm and is filed under Drama. You can follow any responses to this entry through the RSS 2.0 feed. You can leave a response, or trackback from your own site.