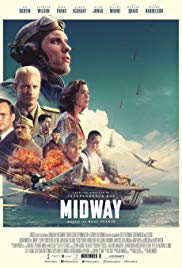 Greetings again from the darkness. Japan’s World War II goal was to devastate the United States Navy fleet in the South Pacific, thereby securing the area as their own and crippling the U.S. military beyond hope. The December 7, 1941 attack on Pearl Harbor was the first step and the most infamous. Over the next few months, what followed were the Raid on Tokyo (April 1942), Battle of Coral Sea (May 1942) and the Battle of Midway (June 1942). Stating that these battles changed the war is not an understatement, as the Imperial Japanese Navy had previously been viewed as superior (especially after the destruction at Pearl Harbor). Director Roland Emmerich (THE PATRIOT, INDEPENDENCE DAY) has never met a war or explosion or special effect he didn’t like, so we know going in that, given the subject matter and the filmmaker, the screen will be filled with action.

Emmerich co-wrote the script with Wes Tooke (his first feature script), and as with many WWII movies, it acts as a history lesson on a war that changed the world. This one focuses on naval strategy and particularly on the individuals who defined courage and heroism … many names we recognize from history books. The contrast between Japanese military leaders and United States military leaders is on full display, and it’s no surprise that the Japanese leaders are mostly portrayed as cold and calculating, while the U.S. leaders come across as more humanistic and resourceful. Pride is evident on both sides – it’s just displayed differently.

Much of the story is told from the perspective of naval pilot Lieutenant Dick Best (Ed Skrein, DEADPOOL). While personal stories and challenges faced by individuals makes for a relatable story for viewers, there is something about this particular actor that comes across as awkward and difficult to bond with. There is no doubting the character and courage of Dick Best as a pilot; however, Skrein’s performance is flat out annoying and distracting. The dive bombing missions are breathtaking and thrilling, but overall the liberal use of green screen for effects detracts from the realistic looks we’ve come to expect for war movies.

Mandy Moore as Anne Best, and Nick Jonas as a mechanic, are cast for relatability by viewers, but the value in the film comes from an easy-to-follow description of the contrasting strategies of the two militaries. It’s also a reminder that the “big” story of WWII is comprised of many individual stories of people … people who were brave and heroic in a time of need. So ignore the cheesy affects, unrealistic dialogue, and irritating performances, and instead take in the work and actions of those who saved the world.

This entry was posted on Thursday, November 7th, 2019 at 11:59 pm and is filed under Drama, War. You can follow any responses to this entry through the RSS 2.0 feed. You can leave a response, or trackback from your own site.