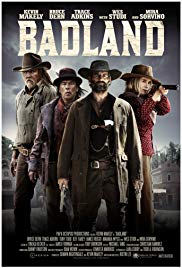 Greetings again from the darkness. Westerns are always a risky proposition for a filmmaker, but some are drawn to the genre and seem to thrive on the intricacies that fans have come to expect. Justin Lee is one such filmmaker. He wrote and directed this film and follows the familiar tropes: a quiet, proud protagonist; the strong, lonely woman; the corrupt gunslinger – maybe wearing a badge, maybe not; and of course, the battle of good versus evil.

Kevin Makely stars as Matthias Breecher, a Civil War veteran and now Pinkerton detective carrying out the orders of Senator Benjamin Burke (Tony Todd, CANDY MAN, 1992). Senator Burke has pledged to track down war criminals and hold them accountable by administering justice. Breecher is the Senator’s hired hand who travels from town to town, serving warrants and dealing with those who refuse to abide

Mr. Lee’s film is divided into four chapters. Chapter 1, “The General”, finds Breecher face-to-face with tough-talking General Corbin Dandridge (Trace Adkins). It’s here where Breecher first flashes his impressive gun skills, and it’s soon after where he crosses paths with Harlow (recent honorary Oscar recipient Wes Studi), a competitor in the “bounty-hunter” game. Chapter 2, “The Cooke’s” has Breecher tracking down Reginald Cooke (played for all it’s worth by a finger-wagging Bruce Dern), a sickly old man dying slowly from pneumonia and living with his daughter Sarah (Oscar winner Mira Sorvino). Local bad guy Fred Quaid (James Russo) is trying to seize the Cooke’s land (apparently this is the possessive apostrophe in the chapter title). During this segment we get a nasty fist fight, an ugly shootout, and Breecher falling for Sarah and actually shushing his horse. Chapter 3, “The Sheriff”, brings us to the terrifically named town of “Knife’s Edge” where equally terrifically named evil guy Huxley Wainwright (Jeff Fahey) wears a badge and rules the town with a reign of terror, and with Old West waterboarding. There is even a double-tap grave side shootout. It’s an old mining town and the citizens live in fear – especially the good-hearted barkeep Alice (Amanda Wyss). The segment ends with a ‘high noon’ duel in the dusty street.

Chapter 4, “Breecher”, acts as a finale for our hero, a man we are told was “born to violence.” His dreams of owning land may have faded, and soul-searching has him reckoning with the man he’s become. Mr. Makely reminds of actor Anson Mount in his ability to hold a scene, and we can’t help but think that in his younger years, Mr. Fahey could have easily played the Breecher role. Despite the out-of-place linguistic stylings, director Lee proves the lessons of the old west never get old, and it leaves us with the message … ‘Be still, young man.”

This entry was posted on Thursday, October 31st, 2019 at 9:10 pm and is filed under Western. You can follow any responses to this entry through the RSS 2.0 feed. You can leave a response, or trackback from your own site.