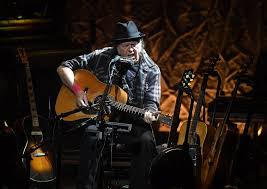 Greetings again from the darkness. A trip to the Rocky Mountains in Colorado takes us more than 1.5 miles above sea level (8750 ft) to the Studio in the Clouds. It’s here where Neil Young and the band Crazy Horse have gathered to record yet another album in what has been a 50 year (off-and-on) musical relationship. It’s a rare opportunity to watch a band work out the finer points of their songs while in the studio.

Between deep hits from their oxygen tanks, these four musicians and producer John Hanlon deal with multiple takes, re-writes, and technical glitches. Sometimes the mood is quite tense, and other times quite laid back. Mr. Hanlon is suffering from a case of poison oak at the time of recording, making for a stressful environment when Neil Young scolds him for too much feedback, or not enough volume, or some other irritant that is likely related to as much to the artist’s general frustration with creating as it is to the antiquated wiring of the studio.

In addition to the expected guitar, piano, bass, and drums, an impressive array of instruments are utilized. Also in play here are: a pump organ, harpsichord, glass harmonica (very cool), and a xylophone. We even get to see Nils Lofgren tap dancing! Many will recognize Nils as a long-time member of Bruce Springsteen’s The E Street Band. Lofgren’s ability to keep Crazy Horse in step with Neil Young is underplayed here, yet still quite obvious.

“It doesn’t have to be good. It’s going to be great.” This is a line uttered as the band hears the playback on a particular song. It drives home the importance musicians put on performing, and perfectly complements what we see from Neil Young – love and commitment to the music. He’s still the amazing songwriter and rebel who wrote “Ohio” in a just a few minutes after seeing the photos from the Kent State tragedy in 1970. This current album proves his songs of societal awareness are not a fad, but rather a belief system.

The documentary is “In memory of Elliot Roberts, the greatest manager of all-time.” Mr. Roberts died in June of this year, and in addition to being Neil Young’s long-time manager, he also managed the careers of Joni Mitchell, Tom Petty, and The Cars. A driving force behind the music phenomenon from Laurel Canyon in the 1960’s and 70’s, Mr. Roberts was a very popular and talented figure in the music industry. Although the vast majority of the film takes place inside the studio, we do get a few clips from Neil Young performing songs live, and periodic shots outside – mountains, sky, and clouds. With this being billed as ‘a film by Bernard Shakey and DH LoveLife, it should be no surprise that the real folks behind those names are Neil Young and his long-time partner, actress Darryl Hannah. The film may not be an extraordinary work of art itself, but it’s very interesting to see one of the most successful and dedicated musicians of the past 50 years hard at work, doing what he does.

This entry was posted on Thursday, October 24th, 2019 at 9:29 pm and is filed under Documentary, Musical. You can follow any responses to this entry through the RSS 2.0 feed. You can leave a response, or trackback from your own site.