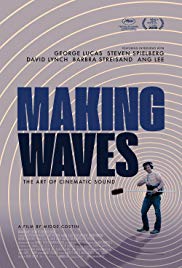 Greetings again from the darkness. Did you hear that? While watching a movie, you are likely aware of explosions and spoken dialogue, but it’s quite astounding how many other sounds can make up a movie-watching experience. While it’s true that we think of movies as a visual medium, it’s not a complete description. Oscar winning director Steven Spielberg said, “Our ears lead our eyes to where the story lives.”

Midge Costin was a noted Sound Editor from 1986 through 1998 on such films as CRIMSON TIDE, CON AIR, and ARMAGEDDON. She then transitioned to education and has spent 20 years at the renowned USC Film School, holding the Kay Rose endowed chair in the Art of Dialogue and Sound Editing. She is truly a sound expert, and in this, her directorial debut, she beautifully lays out the art form of sound that takes place within the art form of cinema.

Ms. Costin structures the film with an historical timeline, personal profiles of some of the most important figures in sound, and a breakdown of sound segments and technology. Along the way she includes film clips to provide specific examples, and interviews for industry insight. The film takes us back to 1877 and Edison’s phonograph, and on to 1927 when THE JAZZ SINGER delivered Al Jolson’s voice. 1933’s KING KONG mesmerized with the first true sound effects, and we learn the direct connection between movie sound and radio. We really get the inside scoop on the breakthroughs of American Zoetrope (founded by Francis Ford Coppola and George Lucas), and the importance of Barbra Sreisand’s demands for A STAR IS BORN (1976), Robert Altman’s multi-track NASHVILLE, and the “Wookie” sounds of STAR WARS. Of course, many other films and filmmakers (including Stanley Kubrick) are singled out for moving sound forward.

Some of the most interesting data comes courtesy of the “nerds” known as Sound Designers. Walter Murch (APOCALYPSE NOW), Ben Burtt (STAR WARS), Gary Rydstrom (JURASSIC PARK), and Lora Hirschberg (INCEPTION) are all Oscar winners, and their insight is fascinating along with that of Cece Hall, Bobby Banks, and Anna Behlmer – the latter of whom recounts her experience as a woman doing the fighter jet sounds for TOP GUN.

Cinema sound is divided into Music, sound effects, and voice, with each of these sections have sub-categories. Automated Dialogue Replacement (ADR), digital layers (through Pixar), ambience, and the custom effects of the Foley are all parts of the circle of talent delivering puzzle pieces to the Sound Mixer for assembly. If all of this hits you as a bit too technical, you should know that it’s presented in a manner that makes it easy to follow. Sound is what pushes cinema into an immersive experience for viewers, and you’ll likely walk away from Ms. Costin’s film with an appreciation of just how many elements go into what you hear during a movie – and that’s worth listening to.

This entry was posted on Thursday, October 24th, 2019 at 9:38 pm and is filed under Documentary. You can follow any responses to this entry through the RSS 2.0 feed. You can leave a response, or trackback from your own site.