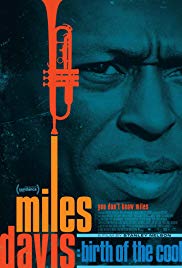 Greetings again from the darkness. The idea of a PBS “American Masters” documentary on jazz great Miles Davis could be cause for concern. The series is known for its high-level and mostly favorable profiles of influential people. Would the series go “deep” enough?  Would it gloss over the dark side? Would it be able to capture the essence of an enigmatic man who changed the music world more than once? The final result is a documentary that acts as a terrific primer for those unfamiliar with Miles Davis, and one that should satisfy his most ardent fans as it chronicles each stage of the music. For this we can thank Stanley Nelson, a documentarian who has delivered several projects on the history of African-Americans.

By definition, the ‘cradle-to-grave’ approach limited to a 2 hour run time means certain aspects must be glossed over. We learn that Miles’ father was a dentist in East Saint Louis, allowing them to be the second wealthiest black family in the state. Of course, this did not shield them from racism and segregation, or even domestic violence within their home … a trait that Miles would carry throughout his own relationships later in life.  “Music comes before everything.” It’s a battle cry from the memoir, “Miles: The Autobiography”. The film features actor Carl Lumbly narrating many of Miles’ own words throughout the film – with Lumbly’s voice bearing a sufficient resemblance to Miles’ distinct sound.

Montages of photos are utilized, initially to kick off the film with shots of Miles performing on stage, and then to mark the specific social and political era as the timeline shifts (1944, 1955, 1969, etc). Interviews are conducted with East Saint Louis residents, Miles’ childhood friends, musicians – those he played with and those he influenced, writers, and historians. Each brings their own perspective to telling Miles’ story, and perhaps none is more insightful than former dancer Frances Taylor, who was married to him from 1968-78. This era and their marriage was a key element of the 2015 film MILES APART starring Don Cheadle. Ms. Taylor passed away in 2018, and her recollections hold much weight and insight into Miles off stage.

The advantage of a chronological recap of his career is that it allows for a clear grasp of just how often the music of Miles Davis evolved over the years. At age 17, he was playing with Dizzy Gillespie and Charlie Parker, and in 1955 at the Newport Jazz Festival he introduced a new style that shook the industry and landed him a lucrative recording contract. He took film score to a new place with Louis Malle’s ELEVATOR TO THE GALLOWS and later played with the great John Coltrane. Of course Miles’ seminal 1959 album “Kind of Blue” is discussed by many who note the impact it had on jazz and music in general. We hear from Wayne Shorter, Herbie Hancock and Carlos Santana as each tries to describe a sound that defies description.

As he himself proclaimed, Miles was all about the music; and because of this, it makes sense that the film focuses on his innovative approach. Director Nelson does not, however, ignore the dark side of the man. As far back as high school Miles was “a genius and weird”, but lifelong battles with drugs and alcohol, and his history of being a difficult and violent partner, put the personal side in stark contrast to the beauty of his music. His first two wives, Frances Taylor and singer Betty Mabry, both documented his violent temper, and it’s a little disappointing that his third wife, actress Cicely Tyson was not interviewed for the film. They were married from 1981-88. Ms. Tyson turns 95 years old this year, and is still a working actor. It was the younger Ms. Mabry that revamped Miles’ fashion and introduced him to Jimi Hendrix and Sly Stone, helping usher in the jazz fusion era.

We do learn the story behind the recognizable raspy voice, and the film covers his time at Julliard, his first trip to Paris (where he met actress Juliette Greco), his collaboration with arranger Gil Evans, the influence of Clive Davis, and his performance with Quincy Jones not long before Miles died in 1991. It’s details like Miles Davis music provided the template for Hip-Hop that make the film click, but of course the real joy is derived from hearing his music from 5 decades of work. Someone in the movie states “I want to feel the way Miles sounds.” And we know exactly what she means.

This entry was posted on Thursday, September 26th, 2019 at 10:18 pm and is filed under Documentary, Musical. You can follow any responses to this entry through the RSS 2.0 feed. You can leave a response, or trackback from your own site.