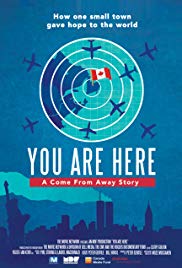 Greetings again from the darkness. September 11, 2001 provided us examples of human nature at its worst, followed by human nature at its finest. Filmmaker Moze Mossenen begins with audio from the September 11 news reports playing over somber and beautiful shots of the Ground Zero memorial. We are immediately transported back to that fateful day, and the emotions come flowing back.

Rather than focus on the terrorists, Mr. Mossenen takes us to Gander, Newfoundland, a Canadian rock island on the far eastern shore of North America. A spectacular aerial view provides perspective for this remote village with a population of around 9000. Gander will forever be remembered as an example of human nature’s finest. On September 11, 2001, when United States air space was closed, Gander airport became a landing spot and parking spot for 38 passenger planes.

We hear from Beverly Bass, an American Airlines Captain who was directed to land at Gander. We also hear from Air Traffic Controllers, passengers, and local Gander citizens, including a local TV personality and Police Chief Oz Fudge and Mayor Claude Elliot. One of the teachers at Gander Academy relays what it was like that day. The locals shared in the worldwide shock from the terrorist acts. They feared for their own safety as the breadth of the terror plan was unknown. They watched in wonder as plane after plane landed at their small airport. And finally, they kicked into gear realizing there were thousands of passengers on the planes … each of whom were hungry, tired and frightened.

The “come from away” folks – Gander’s terms for anyone from somewhere else – numbered 6700, nearly doubling the town’s population. It took approximately 24 hours before the passengers could be taken from the planes, and in one of dozens of fascinating elements, we learn school buses are used for transport since the town only had 15 taxis. The local bus drivers were on strike, but all agreed to volunteer to drive the passengers to the churches, schools, and organizations providing shelter.

Mossenen does end up showing the footage of the planes hitting the towers, but it’s important to know that this is a film of personal stories … people doing extraordinarily kind things for those they don’t know. The spirit of Gander was something to behold. Religious and cultural differences were overcome and hospitality was the norm. It’s stunning to see the United States radar with zero planes in the air, but it’s life-affirming to see folks serving those in need, expecting nothing in return.

The film excels while Gander citizens and the air passengers recollect those few days, but it loses a bit of steam towards the end. On the 10th anniversary of September 11, Irene Sackoff and David Heim began interviewing folks and collecting stories in order to write a musical of the events. And they succeeded. Yes, “Come From Away” became a Broadway hit, and the film shows those from Gander who made the trip to NYC to see the show. This is one time where the lights of Broadway pale in comparison to ‘101 ways to cook goulash’. The willingness to do what needed to be done is the inspirational message delivered by Gander. Neighborly love and generosity in the aftermath of tragedy turned this into a beautiful story … the best of humanity. Moose stew anyone?

This entry was posted on Thursday, September 5th, 2019 at 6:00 pm and is filed under Documentary. You can follow any responses to this entry through the RSS 2.0 feed. You can leave a response, or trackback from your own site.