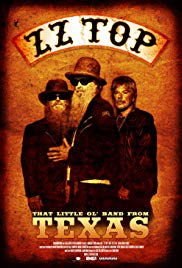 Greetings again from the darkness. The opening credits are still rolling when we hear the very familiar chords and vocal growls that kick off ZZ Top’s mega-hit “La Grange”. Director and music documentarian Sam Dunn delivers quite a celebratory tribute to this ‘little ol’ band’, and it’s likely that even their biggest fans will learn something new.

We first see the three band members as they drive a classic convertible right up to the front door of the historic Gruene Hall. Their subsequent jam session inside the rustic dance hall acts as a framing device throughout the film – proving they’ve still got “it”. Director Dunn introduces us to each band member separately in the beginning. Dusty Hill walks us through his man-cave and explains his appreciation of Elvis both today and as a kid growing up in Dallas, and recalls playing with his brother’s band The Warlocks. Frank Beard reminisces about playing regular gigs in Ft Worth and meeting up with Dusty first, and later with Billy. Billy Gibbons takes us through his early years in Houston, having some success with his band Moving Sidewalks, and opening for the Jimi Hendrix Experience.

The film moves takes a traditional timeline approach, but there is really nothing conventional about this band. Superfan Billy Bob Thornton describes ZZ Top as “unique and eccentric”, and other admiring interviews include Steve Miller and Josh Homme. Discussed throughout is the “mystique” of the band, which apparently stems from their spurning of Los Angeles and New York, while choosing instead to blend Texas with Nashville. In the early days, many critics and music executives tried to label them a blues band, but Mr. Gibbons said it best when he stated they were “interpreters of the blues.”

Director Dunn utilizes some animated sequences to fill in bits of the historical timeline, and that technique proves quite fitting when the band’s music videos for MTV are described as presenting the band members as ‘cartoon’ characters surrounded by cool cars and beautiful girls. The influences of their manager Bill Hamm, and video director Tim Newman are noted, which goes to the underlying theme here. These 3 guys, despite incredible career success, remain quite grounded and humble.

It’s been more than 40 years since I first saw ZZ Top in concert, yet I learned more about the band and these men during this film than over all these years. The origin of the band name and their commitment to experimenting with music and sound and stage shows are all details that stand out. It’s said, “No one else looked like them. No one else sounded like them.” The iconic beards were originally grown as disguises, but soon became trademarks … although, ironically, drummer Frank Beard is the one without a beard! ZZ Top has played halftime of a Super Bowl and been inducted to the Rock n Roll Hall of Fame, but having these guys tell their own stories confirms they realize how fortunate they are to have played with guys they want to play with for so long (they are the longest surviving rock lineup) … this little ol’ band has “legs”.

This entry was posted on Wednesday, August 14th, 2019 at 7:18 pm and is filed under Documentary. You can follow any responses to this entry through the RSS 2.0 feed. You can leave a response, or trackback from your own site.