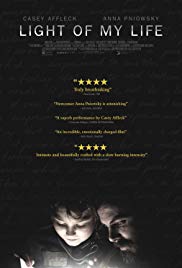 Greetings again from the darkness. The opening scene features an adolescent child spellbound by the bedtime story being told by a father. The story is an enhanced and personalized version of Noah’s Ark, and the scene goes on for at least 10 minutes … the camera never leaving their faces. What appears to be a simple campout turns curious, if not a bit ominous, as the father is next shown taking down a rigged security system and hiding certain personal items. This is the narrative feature directorial debut for Casey Affleck, who also wrote the story, produced the film, and is the lead actor (the father noted above).

As the daily rituals of these two characters unfold, the pieces of the puzzle come together and we learn there has been what is described as QTB – a female plague – that has killed off most of the females on the planet. As if a world of only men isn’t frightening enough, the father’s traveling companion is soon revealed to be a young girl disguised as a boy. This creates the ominous tone and explains the ever-present danger for these two, as rumor has it that the few remaining women are being held captive in camps to prevent the entire species from being eliminated. This is the story of one man’s efforts to protect his precious daughter from a society gone awry.

Anna Pniowsky establishes herself as a young actress to keep an eye on, as she is terrific as Rag, the daughter in disguise. Wise beyond her years, and though she has a general understanding of the constant threat, she is also quite curious about herself, her mother, and this bizarre world she is traversing with the only person in the world she can trust. Elisabeth Moss appears as the mother during flashbacks for Affleck’s character. This previous home life was a peaceful and loving environment, but the mother was stricken by the plague not long after giving birth to the daughter.

In contrast to the motherly environment, this father-daughter bond and existence requires constant preparation for escape. They must always be ready to “go” at a moment’s notice. Their red alerts and back-up plans are discussed and repeated. Their life in hiding means they never know who they can trust, and their solution is to distrust everyone – even though the father explains not all men are the enemy. His low key sense of calmness masks the constant stress they face.

Mr. Affleck is an Oscar winning actor (MANCHESTER BY THE SEA), and he shows some promise as a filmmaker (after his previous experiment with Joaquin Phoenix in I’M STILL HERE). Expert cinematography is provided by Emmy winner Adam Arkapaw (“True Detective” season one). At its core, the film is a story of the bond between father and daughter; however, it’s wrapped in a survival story. They strive to survive the next hour, the next day, and the next night. The film is a blend of CHILDREN OF MEN (2006), THE ROAD (2009) and LEAVE NO TRACE (2018), yet it brings a different tone and an emphasis to just how far a parent will go to protect their child. It’s a dystopian tale with a splash of gender identity questions, and a bond between father and daughter best surmised with their own words, “I love you to the sun and back.”

This entry was posted on Wednesday, August 7th, 2019 at 11:06 pm and is filed under Drama, Thriller. You can follow any responses to this entry through the RSS 2.0 feed. You can leave a response, or trackback from your own site.