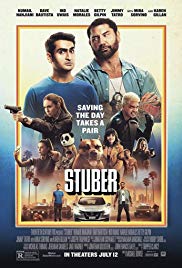 Greetings again from the darkness. A wild and over-the-top chase-fight-shootout at the Staples Center is the action-packed opening sequence, leading us to believe we are about to spend 90 minutes watching a mountain-sized rogue-cop out for vengeance. And then, as soon as that He-Man cop squeezes into the front seat of an electric car Uber, everything changes. The seismic shift in tone transitions our movie into a throwback to the 1980’s buddy action-comedies, only with a few contemporary twists. Whether that’s an improvement will depend on your preferences.

As intense as that opening sequence is, we can’t help but chuckle as we see Dave Bautista and Karen Gillan, co-stars of GUARDIANS OF THE GALAXY, reuniting on screen as police partners Vic Manning and Sara Morris. Their attempts to apprehend drug dealer Teijo (Iko Uwais, THE RAID: REDEMPTION) goes horribly wrong and sets Vic on his mission to track down Teijo as he strives to avenge the death of his partner. It’s this personal vendetta that has Vic prioritizing the job and his need for revenge over his relationship with his daughter Nicole (Nathalie Morales, BATTLE OF THE SEXES).

Vic inadvertently schedules his LASIK surgery on the same day as Nicole’s gallery showcase of her sculptures, and this decision leads to his being crunched up in the front seat of Stu’s UBER (“Stuber”, get it?). Kumail Nanjani (THE BIG SICK) stars as Stu, the timid, peace-loving guy who also has a lousy job at a retail sporting goods store, and makes bad financial decisions based on his WHEN HARRY MET SALLY situation with Becca (Betty Gilpin). Stuck in the friendzone, Stu’s unrequited love has him in the role of good guy to call whenever Becca gets dumped or needs money.

Director Michael Dowse and writer Tripper Clancy turn the film into a road trip around the L.A. area, with each new destination punctuated with another comedic exchange between the intimidating Vic and the ‘I just wanna be with Becca’ Stu. In supporting roles, we get Mira Sorvino as Vic’s police Captain McHenry, and Jimmy Tatro as Stu’s entitled and clueless store manager Richie.

Other than the frenetic opening sequence, most of the action scenes play second fiddle to the comedic interactions between opposites Vic and Stu. Unlike FREE FIRE where the comedy and action complemented each other, this film oddly allows some of the violent moments to double as punchlines … these end up failing as both action and comedy. The film is certainly at its best when Vic and Stu are riffing off of each other, especially in the cozy front seat. The eyesight gag is overplayed and gets old pretty fast, but Kumail again proves he’s a master of deadpan one-liners. The hulking Bautista more than holds his own (despite the incessant squinting), and the film touches on today’s man vs the traditional idea of a man’s man. It’s a bit of a throwback to such buddy films as 48 HOURS, MIDNIGHT RUN, and TANGO & CASH, but it also provides a contemporary take on rogue cops, romance and masculinity. It’s no LETHAL WEAPON, but the banter between Kumail and Bautista provide quite a few entertaining moments.

This entry was posted on Thursday, July 11th, 2019 at 5:17 pm and is filed under Action, Comedy. You can follow any responses to this entry through the RSS 2.0 feed. You can leave a response, or trackback from your own site.