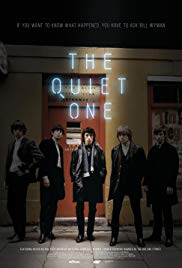 Greetings again from the darkness. Very few rock stars would be content having the nickname “Stoneface”, or having a documentary on their life titled “The Quiet One”, but then Bill Wyman is not a typical rock star. Having quit The Rolling Stones after being a member for 31 years, Wyman allows director Oliver Murray to present his life … a life meticulously documented and cataloged through home movies, photographs, memorabilia, and personal diaries.

Most of our glimpses of octogenarian Wyman show him hunched over a desk in what appears to be the basement of his house. The room is painstakingly organized by year and category on multiple shelves. It has the look of a library or a Smithsonian backroom. We see musical instruments, photo albums, diaries and other collected items of note. Some of Wyman’s own videos and photographs are used to chronicle his life. It begins in his childhood in war-torn London as German bombers fly over, sending Wyman’s family into the air raid shelters.

We learn of Wyman’s first band, The Cliftons, and how he transitioned to playing bass by default. It’s interesting to hear Wyman speak of his musical influences, starting (obviously) with Chuck Berry, and then spiking with Duck Dunn, the bassist for Booker T and MG’s. His heartfelt recollection of meeting Ray Charles is a reminder that music is more than a job … it’s the make-up of a musician.

A documentary about the bass player for the greatest rock band of all-time would likely focus on the glamour, drugs, debauchery, hit songs, and world tours … and director Murray (his first documentary feature) touches on all of those. However, this is really an intimate look at Bill Wyman the person, more so than Bill Wyman the rock star. We learn the source of his stage name, his closeness to late band member Brian Jones, his anti-drug stance, his military stint, and about his 3 marriages – including the scandal around his second to the much younger Mandy Smith.

Wyman’s own personal archives provide the foundation for much of what we see on screen. It’s an impressive collection and he comes off as quite an introspective fellow. When discussing his bass playing, Wyman states, “If you play it right, you don’t get noticed.” The film opens with the raucous “Paint it Black”, and as much as I hate to differ with Mr. Wyman’s description, we quite easily notice his bass is the driving force behind the classic song. He quit the Stones after 31 years (and one final world tour) to concentrate on family, explore music with his own band, spend more time on photography and travel, author a few books, consult, and organize his diaries and memorabilia. For “the quiet one”, the archives tell his story.

This entry was posted on Friday, June 21st, 2019 at 8:24 am and is filed under Documentary. You can follow any responses to this entry through the RSS 2.0 feed. You can leave a response, or trackback from your own site.