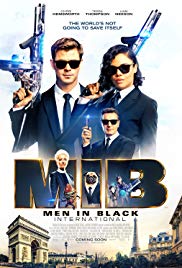 Greetings again from the darkness. This is the era of sequels and spin-offs, and every studio dreams of franchises they can squeeze for profit again and again. The 4th entry in the MIB franchise {MEN IN BLACK (1997), MEN IN BLACK II (2002), MEN IN BLACK 3 (2012)}, is certainly more spinoff than sequel, although there is a nugget that ties it to the earlier versions. While we get a new cast and a new director, there are plenty of familiar elements to satisfy loyal fans, although winning new ones may be less likely.

Chris Hemsworth and Tessa Thompson are reunited from THOR: RAGNAROK and AVENGERS: ENDGAME to take the leads as Agent H and Agent M, respectively. Replacing the chemistry of Will Smith and Tommy Lee Jones is a pretty tough challenge, even for two likeable and talented actors. Because of that, it probably makes sense that director F. Gary Gray (STRAIGHT OUTTA COMPTON, 2015) and co-writers Matt Holloway and Art Marcum (also co-writers on the original IRON MAN, 2008) take the film in a slightly different direction. There are two key story lines: discovering the “mole” within MIB, and protecting the world’s most dangerous weapon from falling into the wrong hands.

Hemsworth overplays his dashing, somewhat inept super agent (a cross between Bond and Clouseau) who charms his way out of every situation, and even though he doesn’t fit the MIB we are accustomed to, he’s fun to watch and good for some laughs. Ms. Thompson (so good in CREED) is the brainy rookie who spends two decades trying to maneuver herself into a position at MIB, and once she does, it’s clear she belongs. Back from the third film is Emma Thompson as Agent O, a senior MIB manager who interviews and hires Molly. Rafe Spall is Agent C, Agent H’s internal adversary, and Liam Neeson is High T, the bureau chief. Rebecca Ferguson appears as Riza, Agent H’s handsy former squeeze turned villain in a cool fortress. Dancing twins Laurent and Larry Bourgeois play two shape-shifters (a description that doesn’t do justice to their skills).

The story bounces from Paris to Brooklyn to London to Marrakesh to Paris to Naples. It’s a pretty wild adventure with the snazzy guns and futuristic vehicles we’ve come to expect. In fact, the Lexus reps the brand quite nicely. Molly’s backstory is provided early on as the kind of kid who reads Hawking’s “A Brief History of Time” in bed, and the film offers some clever touches with office artwork and the early years of MIB (Gustave Eiffel), but overall it just seems to be missing something. Fortunately, while H and M are saving the world, Kumail Nanjani as Pawny (voice) is saving the film. His little character provides the most laughs and the most creative punchlines. The franchise has enough of a loyal following that the film should do fine, however it will be surprising if this one can replicate the success of the first 3 films … although, you guessed it, the sequel to the spin-off is teed up.

This entry was posted on Thursday, June 13th, 2019 at 6:19 pm and is filed under Action, Comedy, Fantasy, Sci-Fi. You can follow any responses to this entry through the RSS 2.0 feed. You can leave a response, or trackback from your own site.