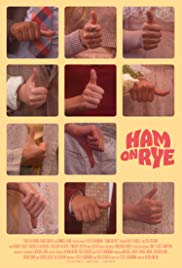 Greetings again from the darkness. Should I stay or should I go? Only it’s not really your choice. Some bizarre ritual, or rite of passage (or no passage), is held to determine whether one is selected to venture into the world, or instead resigned to remaining a local forever.

We first see the teens clumped in their cliques, nervous energy palpable on the screen. Anxiety is prevalent but we aren’t exactly sure why. Slowly each of the young folks makes their way to Monty’s Deli – only, contrary to the title, it’s not for the ham on rye. The typical awkward teenage social event is underway, only there is more at stake here than who will dance with who.

Director and writer Tyler Taormina and co-writer Eric Berger have delivered a scathing commentary not just on the suburbs, but of the realities faced by high schoolers all over. In every home town, some kids head off to college or off into the world in some other manner, while another group gets “left behind”. What follows is a gap or void between those who leave and those who remain. In the film, the void even exists within families.

The film opens and closes with sequences in the community park. Young kids are quite normal – running, jumping and laughing. The older adults seem to be merely existing. There is an almost supernatural approach here by the filmmaker, but it does beg the question … how much control do we have over our fate at that age, and are we accepting of our lot?  Pretty interesting fodder for discussion.

This entry was posted on Wednesday, June 12th, 2019 at 7:19 pm and is filed under Comedy, Drama, Fantasy. You can follow any responses to this entry through the RSS 2.0 feed. You can leave a response, or trackback from your own site.