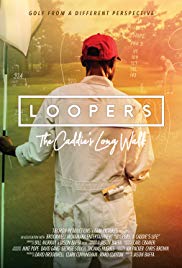 Greetings again from the darkness. It’s a bit difficult, after watching this documentary, to not question the motives of director Jason Baffa. Was his mission really to explore the history that forged the bond between caddy and player, or was he actually after a fantasy trip to see the world’s most historic golf courses and interview some of the sport’s most iconic figures?  Either way, we can’t help but be a bit jealous!

Lest you think the jealousy might be exaggerated, you should know the film kicks off at Ballybunion Club in Ireland, and also includes visits to St. Andrews in Scotland, Canterbury Golf Club in Ohio, Carnoustie in Scotland, Bandon Dunes in Oregon, Augusta National in Georgia, and Pebble Beach in California. Director Baffa’s interviews include Tom Watson, Nick Faldo, Lee Trevino and Ben Crenshaw. And if that’s not enough, the narrator is none other than Bill Murray, himself a golf lover associated with the best “golf” comedy of all-time (the pond is good for him after a day of chasing gofers).

“Show up. Keep up. Shut up.” We learn that was the early creed for caddies as they were meant to only carry the bag for players, and occasionally help locate the misplaced shot. It didn’t take long, however, for players to recognize the value of local course knowledge, and caddying slowly evolved into a craft. It’s quite interesting to see the contrast between caddies hustling for a gig in the parking lots of clubs, to those who became rich and famous, often tied to the bag of a pro golfer for years. Examples shown include the heartfelt story of Bruce Edwards as a career caddy for Tom Watson; the first female caddy, Fanny Sunesson, working with Nick Faldo during his streak; and of course, Fluff Cowan and Steve Williams who both had runs with Tiger Woods.

Director Baffa and writer/editor Carl Cramer spend as much time talking to the history of golf as to how caddies fit in. They mention that 1474 is believed to be the first record of golf, but those in Scotland would argue it came about decades prior. A tale that ties golf to Mary Queen of Scots and the murder of her husband is told, and the true Cinderella Story of Greg Puga becoming the first caddy to tee it up at the Masters claims plenty of screen time.

Old Tom Morris’ legacy at St. Andrews is covered, as is the tie between the great Bobby Jones and Augusta National, and how the change in caddy policy affected so many African-American men. A trip to Oregon explains how Bandon Dunes is the closest thing the U.S. has to an actual links course, and most of us hear for the first time about the Evans Scholarship for caddies and George Solich’s Caddy and Leadership Academy. It turns out the CADDYSHACK really wasn’t a documentary, but it is true that the best caddies must be a blend of therapist, friend, and coach. It’s not job for the faint of heart, but caddies can certainly be the difference in a good round.

This entry was posted on Thursday, June 6th, 2019 at 11:47 pm and is filed under Documentary. You can follow any responses to this entry through the RSS 2.0 feed. You can leave a response, or trackback from your own site.