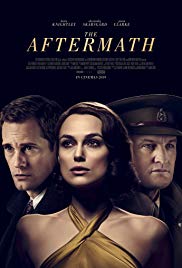 Greetings again from the darkness. It’s 1945 on the heels of the Allied forces victory in WWII. British officer Lewis Morgan is charged with overseeing the military’s role in beginning the process of returning a sense of normalcy back to Hamburg (and assisting with hunting Nazi loyalists). He is joined there by his wife Rachel, and they are to occupy a beautiful mansion that has been “requisitioned” from a German architect and his daughter. Captain Morgan makes the unusual offer of having the man and his daughter remain in the house, rather than relocate to one of the dreadful camps, where food and privacy is scarce. Here’s a tip gentlemen: never invite Alexander Skarsgard to live in the same house as your significant other.

Captain Morgan is played by Jason Clarke, and his wife Rachel by Keira Knightley. The aforementioned Skarsgard is Stephen Lubert, and Flora Thieman plays Freda, his rebellious teenage daughter. On her train ride in, Rachel hears a young girl discussing the rule of “no fraternizing” with the German people. Of course, we know (even if Rachel doesn’t know yet) that it’s not the little girl who is going to break this rule. An awkward reunion for Morgan and his wife indicates something is amiss. We soon learn that their young son was killed 4 years prior in a bombing – a hardship they share with Mr. Lubert, whose wife was also killed during the war. Clearly the loss of her son still impacts Rachel to the point that she rarely finds a moment of happiness.

If this was a “Seinfeld” episode, this is where ‘yada, yada, yada’ would be inserted, letting us know that a tryst between Lubert and Rachel occurs while husband Morgan is out on duty, and that romp brings her instantly back to life … with smiles and piano playing. This little lovefest is contrasted with the rubble of Hamburg. The city is literally in ruins. The visuals are impressive, but we never get a feel for the challenge of rebuilding infrastructure and lives. Instead, we get more forbidden love.

Director James Kent is known mostly for his TV work, and the film is based on the novel by Rhidian Brook, who co-wrote the screenplay with Joe Shrapnel and Anna Waterhouse. It would be a mistake to assume, given the outstanding three lead actors, that this is a prestigious WWII drama. An accurate description would be ‘soap opera.’ The set design, costumes, and cast are first rate, but the direction, script, and editing scream soap opera. I believe my final count was 12. That’s 12 shots of someone gazing out of a window … train windows, car windows, house windows, bus windows … every window gets its shot of winsome gazing. It’s best you know going in to expect a soap opera … not that there’s anything wrong with that.

This entry was posted on Thursday, March 28th, 2019 at 9:19 pm and is filed under Drama. You can follow any responses to this entry through the RSS 2.0 feed. You can leave a response, or trackback from your own site.