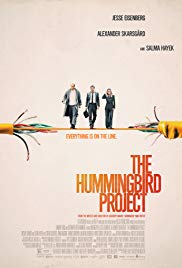 Greetings again from the darkness. More. Better. Faster. Most industries have those goals, and this story from French-Canadian writer-director Kim Nguyen focuses on high-frequency stock traders … particularly a race between two competitive firms to cut one millisecond off the processing time. We learn that one millisecond is roughly one flap of a hummingbird wing (hence the film’s title).

We also learn that one millisecond can translate into hundreds of millions in profits, which is why cousins Vincent and Anton walk away from their jobs at the Eva Torres brokerage firm to pursue their dream of shaving that single millisecond. Vincent (Jesse Eisenberg) is the fast-talking visionary and deal-maker, while Anton (Alexander Skarsgard) is the computer programming whiz. Yes, you read that correctly. Sex symbol Skarsgard (“True Blood”, “Big Little Lies”) plays a paunchy, balding, computer nerd with zero social skills. He also delivers the film’s most enjoyable dance moves … it’s a moment to which any programmer can relate.

If any of the above (other than Anton’s dance) seems the least bit exciting or enticing, you should know that the bulk of the film deals with the digging and drilling (there’s even a montage) required to lay the fiber optic cable that will allow this extra-quick data delivery. Their plan is to tunnel from Kansas City to New Jersey in a perfectly straight line. Because of this, we get conversations with homeowners, conversations with Amish, conversations with drilling experts, and conversations with those who want this to happen, and those who don’t. Have you ever thought about drilling through a granite mountain that is located in the middle of a park? Neither have I, and I wouldn’t have thought of it again if not for writing this review.

To clarify, this is a story that seems like it could be true, but isn’t. Most of the screen time is devoted to either underground drilling, computer programming, or intellectual property. And while I’m sure each of these categories have their fans, most will agree the transfer to cinema does not come off especially entertaining. In fact, it’s so dry that the filmmaker felt the need to include a cancer sub-plot in hopes that we might find Vincent a bit more appealing as a character. It should be noted that since his Oscar nomination for THE SOCIAL NETWORK, Mr. Eisenberg has displayed a remarkable lack of variation in the roles he’s chosen and characters he’s played. At this point, we mostly just find him annoying, rather than brilliant or even mildly interesting.

Salma Hayek plays Eva Torres, former boss of the cousins, and now laser-focused in not letting the boys win. Ms. Hayek is given relatively little screen time, and is portrayed as the villain … although her goals are no different than Vincent’s and Anton’s. Michael Mando plays Mark Vega, the partner and drilling expert the boys choose to project manage this undertaking. Mr. Mando is best known as Nacho from both “Better Call Saul” and “Breaking Bad”. Ayisha Issa brings a momentary jolt to the proceedings as a mountain driller, but the film simply drags when neither Mr. Skarsgard nor Ms. Hayek are on screen.

Technology is a very difficult topic to make visually entertaining. I’m not talking about the high-tech special effects that go into making the wildly successful superhero movies that are so popular these days. No, I’m referring to actual technology … programming and data analysis. The list of technology-focused films includes: SNEAKERS, THE SOCIAL NETWORK, OFFICE SPACE, HACKERS, WAR GAMES, SWORDFISH, and THE IMITATION GAME. The best of these understood that the story around the technology was more vital than the actual programming being done. And all of them were wise enough to avoid drilling and digging. Then again, none of the others featured a dancing Skarsgard.

This entry was posted on Thursday, March 21st, 2019 at 8:16 pm and is filed under Drama. You can follow any responses to this entry through the RSS 2.0 feed. You can leave a response, or trackback from your own site.