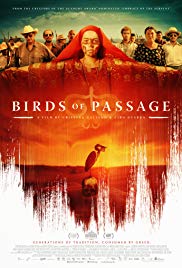 Greetings again from the darkness. It’s not unusual for movies to “trick” us into embracing a drug dealer, and even kind of rooting for them – despite the near universal condemnation of such folks when we are outside of a dark theatre. Co-directors Cristina Gallego and Ciro Guerra were the producer and director behind the Oscar nominated EMBRACE OF THE SERPANT (2015) about an Amazon tribe striving to hold tight to their way of life despite outside interference. This time out, they focus on the rural Guajira territory of Columbia, with its desert conditions and villagers committed to their own traditions.

The film is based on a true story and covers the time period of 1960-1980, and is separated by chapter titles that include the year and a hint of what’s to follow. We first see Zaida (Natalia Reyes) as a girl in confinement as she prepares to be introduced as a woman to the villagers. This is one of the more elaborate rituals of the village, and it leads to Rapayet (Jose Acosta) asking for Zaida’s hand in marriage. Her mother Ursula (Carmina Martinez), a respected village elder, sets the dowry at what she believes in an unattainable level for Rapayet: 30 goats, 20 cows, and 5 necklaces. Ursula has unwittingly set off a chain of events that eventually brings the family money, power, and tragedy. How can a few goats and cows cause this? Well, when one is poor and needs to quickly assemble a large dowry, what better way than to enter the drug trade? And that’s exactly what Rapayet does.

Rapayet’s friend and partner in the coffee trading business, Moises (Jhon Narvaez), joins him in the transition of careers, and while Rapayet is content to build his empire quietly and under the radar, Moises runs amok with the power and money. Ursula is respected for her abilities as a dream reader, and she’s constantly dousing Rapayet’s business with the cold water of her visions … worried mostly about the safety of her daughter Zaida. By 1971, Rapayet’s business of peddling marijuana to gringos is booming, and by 1979 (in a chapter entitled “Prosperity”) we see the results: a mansion-fortress in the desert protected by guards with automatic weaponry (a sure sign that bad news is on the way).

What began as a look at peaceful remote villagers sticking to the traditional path of their ancestors, transforms into a drug war featuring cartel mobsters. Cinematographer David Gallego contrasts the beauty and simplicity of traditions with the danger and violence of new money and new world order. Leonardo Heiblum’s score is a terrific complement as well. The infancy of the Columbian drug trade presented here conveniently places blame on the free-spirited youngsters of the Peace Corps; while the story plays out like a Greek tragedy, replete with mixed messages on revenge, capitalism, tradition, greed, and family ties. It’s a rags-to-riches story that pulls no punches when it comes to the price paid for taking an illicit shortcut. It’s a path that can destroy lives and culture.

This entry was posted on Tuesday, February 12th, 2019 at 11:49 pm and is filed under Drama, World Cinema/Foreign. You can follow any responses to this entry through the RSS 2.0 feed. You can leave a response, or trackback from your own site.